Senior government officials and dignitaries experienced first-hand groundbreaking technologies developed by researchers at City University of Hong Kong (CityU) during a flagship innovation and technology exhibition at the Hong Kong Science and Technology Parks from 2 to 10 November.
131108-4_Inno_L.jpg 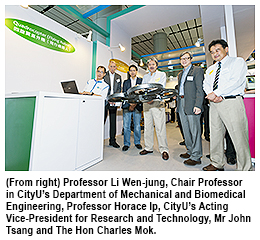 InnoCarnival 2013 is the flagship event of InnoTech Month 2013 organised by the Innovation and Technology Commission (ITC) of the Hong Kong Special Administrative Region (HKSAR) Government from 18 October to 7 December. The aim of the event is to enhance public understanding of, and interest in, innovation and technology, particularly amongst the younger generation.
Visitors to the CityU booth included Mr John Tsang Chun-wah, Financial Secretary of the HKSAR Government, the Hon Charles Mok Nai-kwong, Legislative Councillor, and Ms Janet Wong Wing-chen, Commissioner for Innovation and Technology.
On display were technologies such as robots developed by Professor Xi Ning, Head and Chair Professor of Mechanical Engineering in the Department of Mechanical and Biomedical Engineering, and his team. Visitors could have a go at operating the quadrocopter, a rotorcraft propelled by four rotors which is equipped with inertial measurement units and ultrasonic distance sensor. The quadrocopter can conduct aerial photography, damage inspection, and remote surveillance. 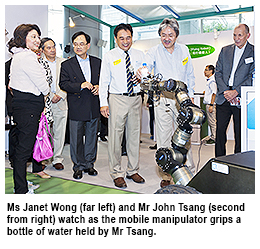 The second robot on display was a mobile manipulator made up of a mobile robot and a manipulator arm that can detect explosives, defuse bombs, clean up toxic waste, and operate in dangerous or harsh environments.
Dr Howard Leung Wing-ho, Assistant Professor in the Department of Computer Science, uses interactive games to raise awareness about environmental protection by encouraging users to save paper and read e-books. Users have to use hand movements to “brush off” the characters on a screen to prevent them from approaching the printer.
About half of the projects on display were developed by students who were supervised by faculty members. Except for the robots that require training in order to control them, all the other exhibits can be operated by hand, which was greatly entertaining for the visitors to the CityU booth. 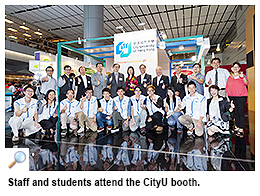 SoloTouch was developed by Jackie Chui Yi-tang and Mubarak Murafa under the supervision of Dr Samson Young Kar-fai, Assistant Professor in the School of Creative Media. This musical device allows inexperienced guitar players to play music resembling blues and rock. It comes with an iPhone app for controlling the device and rendering special effects.
Bananas and pianos seem to be an unlikely combination, but nevertheless they do make an interesting pair. The banana piano installed by George Ho Cho-cheong and Chan Tsz-yu under the supervision of Dr Oscar Au Kin-chung, Assistant Professor in the School of Creative Media comprises real bananas, an Arduino board, electronic components, and portable speakers. The installation is particularly popular among young teenagers. An Aruino is a single-board microcontroller that allows users greater control over electronics in multidisciplinary projects. 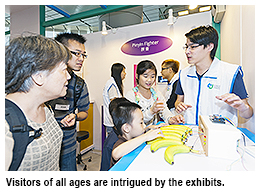 Another invention developed by the students of the School of Creative Media is Pinyin Fighter, a software tool that runs on a Flash platform. Jacky Cheung Kit and his supervisor Mr Yim Chun-pang, Teaching Fellow at the School of Creative Media, wanted to design an interactive system that makes learning Putonghua fun. The idea to develop a Putonghua learning software tool struck Jacky after he joined an exchange programme in Beijing. Users need to match a Chinese character with its corresponding Pinyin symbols through gestures and movements.
Staff members and students interested in trying out the exciting installations are welcome to visit the CityU booth at the carnival over this weekend. Readers may want to browse the following web link for more information: http://www.itm.gov.hk/en/activityinnoc.php