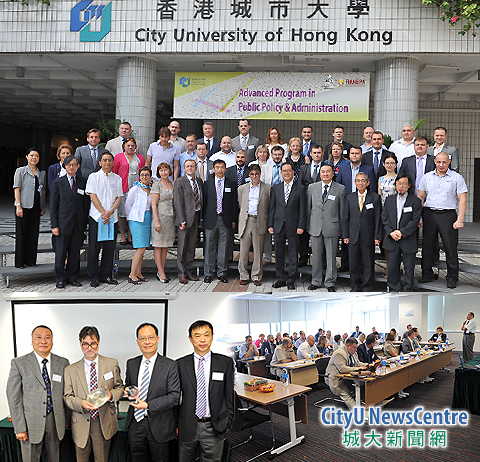 Over 30 senior federal government officials from Russia discussed a range of economic, finance, political and social development issues concerning China and Hong Kong at the Advanced Programme in Public Policy and Administration from 15 to 26 October at City University of Hong Kong (CityU).
Professor Sergei Eduardovich Zuev, Dean of the School of Public Policy at the Russian Presidential Academy of National Economy and Public Administration (RANEPA), Professor Paul Lam Kwan-sing, Acting President of CityU, Professor Yan Houmin, Dean of the College of Business, and Professor Chan Hon-suen, Acting Head of the Department of Chinese, Translation and Linguistics, kicked off the programme, which was jointly organised by CityU’s College of Business and Department of Public Policy.
The programme represented deep collaboration between CityU and RANEPA, both of which are world-class universities, and significant exchanges in best practice and knowledge for government policy and administration between Hong Kong and Russia, Professor Lam said.
Professor Zuev added that CityU had become an important part of the international intellectual, economic and financial centre of Hong Kong. He thanked CityU for ensuring that this interaction opportunity with top managers from Russian government departments had been a success.