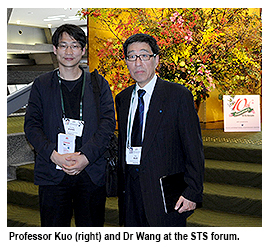 The President of City University of Hong Kong (CityU) and a young CityU scholar attended the Science and Technology in Society (STS) forum 2013 in Kyoto, Japan, between 6 and 8 October.
Professor Way Kuo, the first CityU president ever invited to the forum, was joined at a lunch meeting by 41 other university presidents for a discussion on the enhancement of research on a global scale and evolving models of learning and teaching using digital tools and online resources.
Dr Wang Zuankai, Assistant Professor in CityU’s Department of Mechanical and Biomedical Engineering, was invited to the forum as one of the 10 outstanding and visionary scientists aged 40 or younger from around the world. 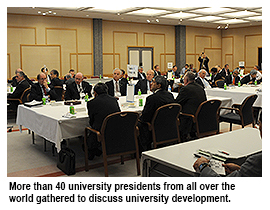 He was chosen by the New York Academy of Sciences on the basis of the high-impact research he and his doctoral students have conducted, including one project on nanograssed micro-pyramid architecture that was published as the cover story in Advanced Functional Materials, a top-tier journal in materials science.
In addition to the university heads, participants at the STS forum, an annual meeting inaugurated in 2004, included top leaders from different constituencies, such as policymakers, business executives, scientists and researchers from all over the world.
As many as 1,000 global leaders from 96 countries and regions participated in the 2012 forum, including 84 university presidents and 50 corporation leaders as well as government ministers in science and technology and education. Over the years, participants have also included 27 Nobel laureates.
Mr Shinzo Abe, Japan’s Prime Minister, delivered a speech at the opening plenary session of the forum on 6 October before he headed to the Asia-Pacific Economic Cooperation meeting in Indonesia.