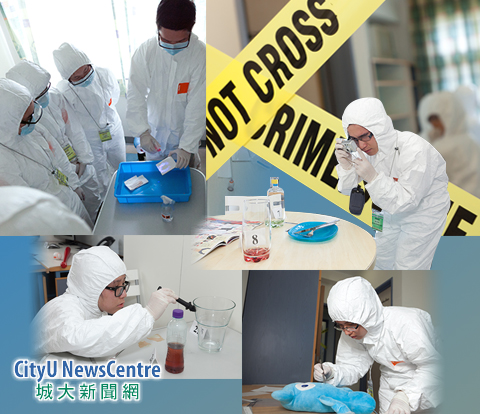 Over 100 secondary students examined bloodstain patterns, matched fingerprints to potential suspects and identified the source of a single fibre during their investigation of a “homicide” at City University of Hong Kong (CityU).
The students were playing the roles of a forensic scientist at a simulated crime scene in a student hostel room during a forensic science scheme jointly organised by CityU and the Hong Kong Federation of Youth Groups between 31 July and 7 August.
In the scheme, participants learn the basic theories behind forensic science, crime scene investigation and analytical chemistry. They are also given introductory talks on the analysis of firearms, fingerprints, bloodstain patterns, DNA, drugs, hair, other fibres, and soil composition.
“It is a great opportunity for the participants to develop critical-thinking skills including observation and analysis,” said Professor Robert Li Kwok-yiu, Associate Dean of the College of Science and Engineering.