Three members of the School of Creative Media (SCM) at City University of Hong Kong (CityU) have been given 2012 Hong Kong Arts Development Awards in recognition of their outstanding achievements in the arts and their significant contributions to the development of local art.
The annual Hong Kong Arts Development Awards are highly regarded within the local art scene. This year’s Award for Best Artist (Media Arts) went to Dr Samson Young Kar-fai, Assistant Professor in the SCM; the Award for Young Artist (Media Arts) went to Mr Choi Sai-ho, a part-time lecturer and SCM alumnus; and the Award for Young Artist (Film) to Mr Lo Chun-yip, also an SCM alumnus. 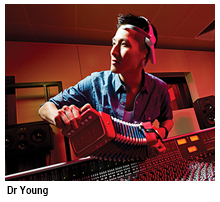 A music composer, sound artist and media artist, Dr Young has served as an artist associate at the Hong Kong Sinfonietta. His works are well-known for integrating contemporary music and technological elements of new media, and he is adept at blending interesting and relaxing elements with formal musical structures, for example, mixing background music used in electronic games with melodies from classical music.
“Most of my multimedia works have elements of music or sound as I have received music training since childhood,” he said. “The award testifies that multimedia accepts different forms of art and encourages collaboration across disciplines.”
To express his gratitude to CityU and the SCM, he added, “The SCM strongly encourages teachers to undertake creative projects and take part in performances, while CityU provides me with an ideal environment that enables me to try novel ideas and do experimental work without constraints imposed by market demands.”
Frequently participating in art festivals, Dr Young has received many awards. He received the Bloomberg Emerging Artist Award in 2007, and he was named in the “Hong Kong Hot List: 20 People to Watch” by CNN’s global portal CNNGo in 2009. He won an Honorary Mention Award at the Digital Music and Sound Art Category of Prix Arts Electronica and the Jury Selection Award at the Japan Media Art Festival organised by the Agency of Cultural Affairs of the Japanese Government in 2012. 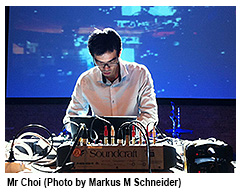 Mr Choi, an electronic musician and audiovisual artist, integrates electronic music and videos, and adds the elements of Hong Kong culture into videos, e.g. raising questions about how the heritage of Hong Kong can be preserved by blending local cultural elements with his video work about Star Ferry Pier and Queen’s Pier.
“Electronic music is more personal, just as playing music on a computer is not as passionate as a live performance. My views have been broadened after studying at the SCM and I have learned how to mix electronic music with videos, which makes electronic music easier to appreciate,” he said, adding that he was grateful to people who like his performances.
Mr Choi was selected by local magazine Time Out as one of the top 20 musicians in Hong Kong in 2008, and his song Weird Mind was honoured as the best Hong Kong indie music track in 2009. In 2011, his music group was selected by CNNGo as one of the best 10 Hong Kong bands. He has also performed in many art and electronic music festivals in the US, Switzerland, Germany, Portugal and Hong Kong. Earlier this year, he was invited by the Leisure and Cultural Services Department of the HKSAR Government to perform solo at “An Audiovisual Concert - Live‧Planet‧Noise”. 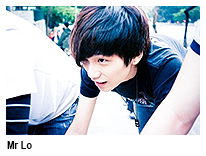 Mr Lo is an emerging film director and actor. Depicting social campaigns in most of his works, he received a Hong Kong Arts Development Award for the films Paradox and To Be Continued that he directed and for his performance as an actor in the TV drama Besides Fortune. The Paradox and To Be Continued are both documentaries about social issues, with the former discussing the issue of discourse rights and the latter chronicling social campaigns in Hong Kong between 2010 and 2012.
“The award helps me define my ability and set my goal for future development. I hope the government can pay more attention to industries other than the financial sector and make more effort to promote art,” he said.
His film Toenail‧Auntie Choi‧Qiaotao won the Qiaotao Cultural Award and the Best Actress Award at Taiwan’s Golden Sugarcane Film Festival in 2010. In the same year, his film 21 years after received the Silver Award in the Open Category at the Hong Kong Independent Short Film & Video Award. In 2011, his film Soboring garnered the Best Actor Award, the Best Production Award and the Best Cinematography Award at Taiwan’s Golden Sugarcane Film Festival.
​