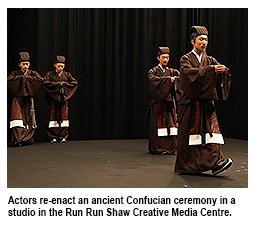 The re-enactment of an ancient Confucian rite has been shot for the first time using a multimedia virtual platform for educational and heritage preservation purposes by faculty, students and an international team at the School of Creative Media (SCM).
In the project, directed by Professor Jeffrey Shaw, Dean of SCM, a live-action thirty-minute depiction of a major Confucian rite is integrated into a virtual world.
The Capping Rites for (the son of) a Common Officer, a coming-of-age ceremony marking a boy’s journey into manhood, has been meticulously re-created using as the primary source ancient texts from the Confucian Classics, which date back to the late Spring and Autumn period, estimated to be from around 770 to 470 BCE.
Actors from the China National Peking Opera Company, under the direction of Confucian experts Professor Peng Lin and his doctorate researcher Mr Zhang Defu of the Research Centre for Chinese Ritual Studies at Tsinghua University in Beijing, performed the rite, which is described in chapter one of the Book of Etiquette and Ceremonial, or Yili, in a virtual studio at the Run Run Shaw Creative Media Centre in June 2013.

“This is a seminal project,” Professor Shaw explained. “Never before have these ancient Confucian rites been filmed with such scrupulous attention to historical accuracy and re-formulated as a virtual multimedia educational and heritage resource.”
The aim of the project, which has been funded with a HK$500,000 donation from the Moonchu Foundation, is to produce an easily accessible range of visualised virtual materials that will interest everyone, from academics to young people in primary schools and the general public.
“The sequences of the rite have been shot in accordance with the exact information prescribed in the ancient texts,” Mr Zhang said.
For example, the computer graphic and special effect specialists have honoured the precise physical dimensions of the temple in which the rite is supposed to have taken place as well as the particular gestures that the performers have to make, the wardrobe that they wear and the utensils that they use during the ceremony as set out by the texts.
The multimedia materials will enjoy a high level of interactivity. Users will be able to focus on specific elements of the rite, for example a particular item of clothing or gesture, and learn more by accessing successive layers of explanatory material. 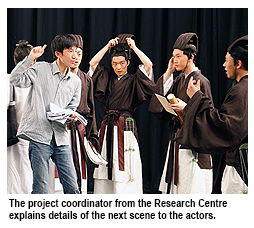 In addition, the use of turntable recordings where the costumes and the ritual utensils are filmed in 360 degrees will permit an audience member to rotate the element in a variety of ways and angles for a more detailed visual analysis.
The filming of the Capping Rites is a pilot project, Professor Shaw said, and the plan is to re-enact all 17 of the Confucian rites set down in the texts, which would include Nuptial Rites for a Common Officer, Rites of Courtesy Calls (State to State), and Mourning Rites for the Common Officer, among others.
Over the years a great deal of classical Chinese culture related to Confucianism was rejected, particularly during the politically turbulent years of the twentieth century. It is only now in more recent times that scholars and the general public have re-visited these elements of traditional Chinese culture.
“This project promises to be the start of an exciting long-term enterprise that will be of enormous cultural significance in China and abroad,” he said.