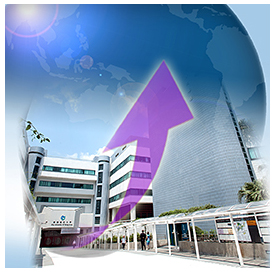 The emphasis on the integration of teaching and research that is so highly prized at City University of Hong Kong (CityU) has translated into international recognition in two recent surveys conducted by QS, the leading global education specialists.
CityU has been ranked 5th in a QS survey of the world’s top 50 universities under 50 years of age, i.e. universities founded in 1963 or after, and we have been ranked 12th in Asia, and 4th in Hong Kong, in the latest QS University Rankings: Asia.
“CityU has proved once again that it is among the best of the best in the region,” said Professor Way Kuo, CityU President.
“These results show that CityU possesses a dynamic culture and is improving all the time. This is the outcome of dedicated teamwork,” he said. CityU was still a relatively young university, he said, but it had taken gigantic leaps in recent years thanks to its vision for higher education.
“Our dual emphasis on teaching and research as well as our focus on innovation has kept our University competitive in the globalised higher education environment,” Professor Kuo added.
“We have totally overhauled our curriculum with the implementation of our pioneering 4-year Discovery-enriched Curriculum and created many new programmes and courses specifically designed to meet the needs of today’s highly competitive global job market.”
The results of the QS rankings for Asia were also notable, he said, because although standards in higher education throughout Asia were rising rapidly, CityU had maintained its 2012 position as the 12th best university in Asia, while its score has increased from 92.31 to 94.7 in 2013.
In particular, we have made a significant impression locally in terms of several of the indicators used to compile the QS rankings. For example, CityU is first in Hong Kong in terms of Papers per Faculty, and for Outbound Exchange Students, and second for International Faculty.