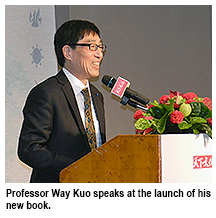 Professor Way Kuo pointed out that energy options, especially nuclear power which is highly controversial, were not a simple “yes” or “no” issue.

Energy is a necessity in modern life and no matter what types of energy source a country or region adopts, energy conservation is paramount, and a long-term energy policy based on the prospects of economic and social developments was needed, according to Professor Kuo. 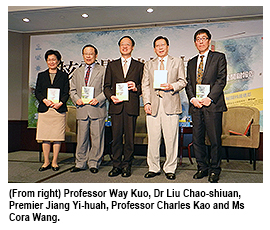 Citing Germany, Sweden and South Korea as examples, Professor Kuo explained that though these countries adopted a different energy mix with some deciding to abandon nuclear power and others aiming at developing more nuclear power, they all had an explicit energy goal based on each country’s natural conditions and the direction of its economic development.
“To develop energy, we must strike a balance between the environment, economic well-being, reliability and sustainability,” he said.
He quoted research data from Professor Johnny Chan Chung-leung, an internationally renowned expert in atmospheric sciences and the Dean of the School of Energy and Environment at CityU. 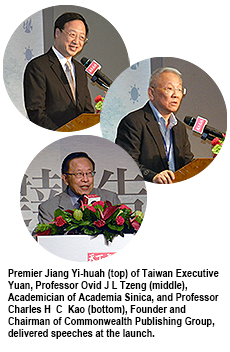 “On 10 May 2013, a carbon dioxide monitoring station in Hawaii was the first to report that the concentration of carbon dioxide was standing at over 400 parts per million. The last time an equal concentration of carbon dioxide in the Earth’s atmosphere was recorded was some 3 to 5 million years ago,” he said.
From the Industrial Revolution in the mid-18th century until now, the Earth's temperature has risen by 1 degree, Professor Kuo said. If the current trend continues, it will rise one more degree in less than 100 years. “Now it’s the moment of truth: we must reduce the emission of carbon dioxide or other greenhouse gas,” he stressed.
Professor Kuo’s recent book, Critical Findings on Nuclear Energy: Reflections of Rainbow Energy, Environmental Protection and Safety in the Wake of Fukushima Nuclear Accident, was published by Commonwealth Publishing Group, a well-respected publishing house in Taiwan.
About 60 leading figures from Taiwan’s industry, government and academia attended the launch, including Mr Jiang Yi-huah, Premier of the Executive Yuan; Dr Liu Chao-shiuan, former Premier of the Executive Yuan and President of the General Association of Chinese Culture; Professor Ovid Tzeng Jyh-lang, Academician of Academia Sinica, together with some 30 reporters. 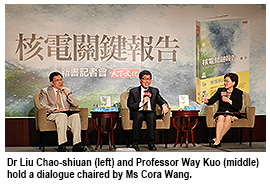