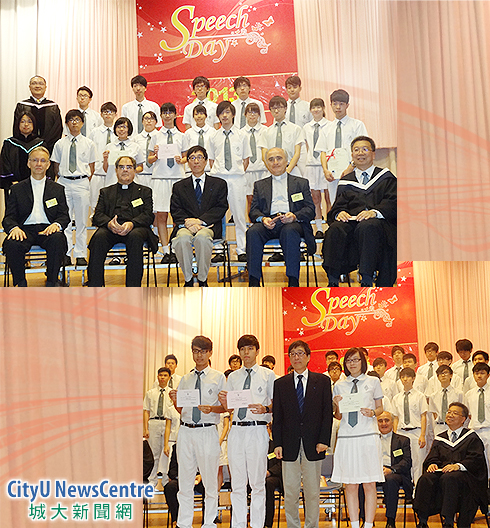 Professor Way Kuo, President of City University of Hong Kong, talked about learning from peers at Speech Day 2012–2013 at Rosaryhill School on 25 May.

He emphasised that there was always someone we could learn from as long as we remained open-minded and kept listening out for new ideas. “Keep your eyes open and look out for people who will inspire you,” he said.

There was a student at CityU who had a strong desire to pursue her studies and was the first one in her family to be enrolled at university, Professor Kuo said. “Unfortunately she was diagnosed with cancer, and yet she continued with her studies even though she was terminally ill. Though she passed away soon after she received her degree in the hospital, she has proved that she could fulfill her dreams in spite of her illness.”
He went on with the story of a CityU alumnus, Mr Yeung Shiu-lun, who captained the University’s Cross-country Team and was a Senior Sports Team Council member. Even though he could have run for his own honour, he chose to run as a volunteer guide instead, helping marathon runners who were partially blind. “He is happiest helping others fulfill their wishes,” Professor Kuo said.
Speech Day at Rosaryhill School, a Christian school established in the early 1960s, marks the graduation of its students.