​City University of Hong Kong (CityU) will confer the title of Honorary Fellow on five distinguished persons in recognition of their significant contributions to the development of, and service to, the University.
On the recommendation of the Honorary Awards Committee of the Council, Dr Norman Leung Nai-pang, Pro-Chancellor of the University, has approved the conferment of the award of Honorary Fellow to Mr Rex Auyeung Pak-kuen, Ms Maggie Chan Man-ki, MH, Mr David Fong Man-hung, BBS, JP, Mr Francis Ngai Wah-sing, and Mr Wong Kai-man, BBS, JP. The Honorary Fellow Presentation Ceremony will be held on 16 September. 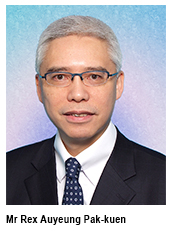 Mr Rex Auyeung, President – Asia and Senior Vice President of the Principal Financial Group, has more than 35 years of experience in the insurance industry. An outstanding leader in the industry, he was appointed a member of the Mandatory Provident Fund (MPF) Office Specialist Group, advising the office on the implementation of the MPF, and he was the Deputy Chairman of the Retirement Scheme Sub-committee of the Life Insurance Council of the Hong Kong Federation of Insurers. Mr Auyeung is an active participant in public service, serving as the Co-Chairman of the Corporate and Employee Contribution Programme Organising Committee, a member of the Campaign Committee and the Investment Sub-committee of the Community Chest of Hong Kong, and a member of the Public Affairs Forum of the Home Affairs Bureau, HKSAR government. He has made a great contribution to the development of Hong Kong, providing valuable support to the University by serving on the CityU Council and its committees from 2007–2012. He is currently a CityU Court member. 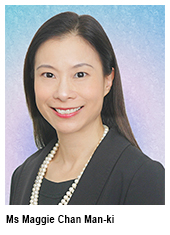 Ms Maggie Chan, a Senior Partner of CMK lawyers, has been providing free legal services to lower income groups since 1999 and free mediation service in the community since 2002. She has a long and distinguished record of public service in Hong Kong and has held a number of government advisory positions, including membership of the Equal Opportunities Commission, the Town Planning Board and the Elderly Commission. She is now serving as an elected District Councillor of the Wong Tai Sin District Council and was awarded the Medal of Honour (MH) and the individual’s award of Home Affairs Bureau’s Recognition Scheme for Provision of Pro Bono Legal Services in 2012. As regards public service on the mainland, she is a Hong Kong member of the All-China Women's Federation and Executive Committee and a member of Hunan Provincial Committee of the Chinese People’s Political Consultative Conference. A keen supporter of CityU, she served on the CityU Council and its committees from 2007–2012 and is a current member of the CityU Court. 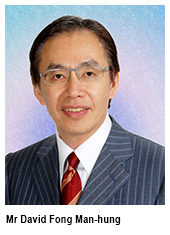 Mr David Fong, Managing Director of Hip Shing Hong Group, Director of Fong Shu Fook Tong Foundation and Vice-Chairman of Fong’s Family Foundation, is an entrepreneur best known for his deep concern for the welfare of the country and society. He is a member of the National Committee and the 11th Guangdong Provincial Committee of the Chinese People’s Political Consultative Conference, and the Standing Committee of the All-China Federation of Industry and Commerce. He has made considerable contributions to the socio-economic development, education and social services in Hong Kong. Among his other public roles, he is the Vice-Chairman of the Hong Kong Chinese General Chamber of Commerce, Chairman of Hong Kong Strategy, a Director of the Friends of Hong Kong Association, and a member of the Advisory Committee on the Revitalisation of Historic Buildings, and the Social Welfare Advisory Committee. He was appointed Justice of the Peace in 2008 and was awarded the Bronze Bauhinia Star in 2011 by the HKSAR government. He is highly supportive of CityU, serving as a Council member from 2007–2012, and is currently a CityU Court member. 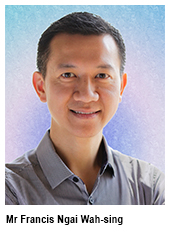 Mr Francis Ngai, founder and CEO of Social Ventures Hong Kong (SVhk), is a prominent figure in social enterprise. He fully dedicates himself to SVhk, a non-profit venture philanthropic organisation which supports social enterprises in Hong Kong by providing financial, intellectual and network resources. He is now serving in a number of government advisory bodies and public service organisations, such as the Central Policy Unit of the HKSAR government, the Advisory Committee on the Enhancing Self-Reliance Through District Partnership Programme of the Home Affairs Department, the Council for Sustainable Development, and the Asia Venture Philanthropy Network. An inspirational role model who works heart and soul for the welfare of society, he was selected as one of the Ten Outstanding Young Persons Hong Kong 2011 and a Young Global Leader of the World Economic Forum 2012. He also obtained a Distinguished Marketing Leadership Award from The Hong Kong Management Association in 2012 and an Honorary Award on Young Social Enterprise from the Junior Chamber International Hong Kong in 2013. Mr Ngai graduated from CityU in 1994 and has offered enthusiastic support for CityU’s education and alumni activities. 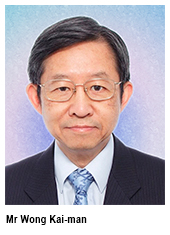 Mr Wong Kai-man is a director of two charity foundations: the Victor and William Fung Foundation Limited and the Fung (1906) Foundation Limited. He is also an Independent Non-Executive Director of five listed companies. A retired audit partner of PricewaterhouseCoopers with more than 30 years of professional accounting experience, Mr Wong is active in public and community service and brings with him a wealth of experience and expertise for the benefit of society. He serves on the boards of certain NGOs and has served on government advisory committees and statutory bodies in the areas of land, immigration, energy, law-enforcement, education and technology. Mr Wong was appointed Justice of the Peace in 2002 and was awarded the Bronze Bauhinia Star in 2007 by the HKSAR government for his dedicated and distinguished public service. He served as a CityU Council member from 2007–2012 and as the chairman of its Audit Committee from 2008–2012. He is currently a CityU Court member.