Professor Way Kuo, President of City University of Hong Kong (CityU), Professor Liu Chain-tsuan, University Distinguished Professor at CityU, and other colleagues from CityU explored opportunities for conducting cooperative scientific and technological research on a visit on 17 May to the Shanghai Branch of the Chinese Academy of Sciences (CAS), the Shanghai Advanced Research Institute of CAS, and the soon-to-open ShanghaiTech University (ShanghaiTech). 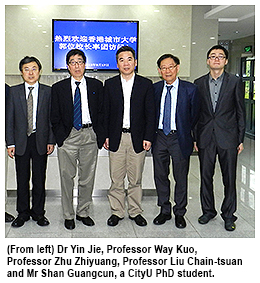 During the visit, Professor Liu introduced his research outcomes in ultra-high-strength steel, light-weight and high-performance alloy, and the application of new metallic glass, among others.

He said he looked forward to forming a strong research team composed of internationally renowned experts in the area of high-performance and high-temperature alloys in co-operation with the Shanghai Branch of CAS, the Shanghai Advanced Research Institute and ShanghaiTech.

The team would aim to achieve internationally advanced standards in the design, manufacturing and feature testing of high-performance metal and micro-nano system, he added.
Research undertaken by the Shanghai Branch of CAS and the Shanghai Advanced Research Institute, the research outcomes attained, and the principles for establishing the soon-to-open ShanghaiTech were introduced by representatives from the relevant bodies.
These representatives included Dr Jiang Mianheng and Professor Zhu Zhiyuan, President and Executive Vice-President of the Shanghai Branch of CAS, respectively, Dr Yin Jie, Deputy Director-General of the Shanghai Municipal Education Commission and Deputy Chairman of ShanghaiTech Preparatory Working Group, Dr Gao Lin, Director of the Department of International Cooperation at the Shanghai Advanced Research Institute of CAS, and other research and management representatives.
Both Dr Jiang and Professor Zhu said that the visit had provided a good opportunity for both sides to explore common research interests, adding that they hoped to focus on real research topics for feasible cooperation.
At the end of the meetings, both sides agreed that they would look further into three areas: ultra-high-strength steel, light-weight high-performance and high-temperature alloy, and applications of new metallic glass.
The Shanghai Branch of CAS, which administers 14 research institutes in Shanghai, and the Zhejiang and Fujian provinces, is a key research organisation on the mainland and a major driver for technological innovations at the national and local levels.
The Shanghai Advanced Research Institute of CAS, which was initiated in 2009 and formally established in 2012, works on cross-disciplinary applied research and talent training in the field of advanced technology.
ShanghaiTech, a research university jointly developed by the Shanghai Municipal Government and CAS, will be administered and funded by the Shanghai municipal government. It will have four schools and two research institutes.