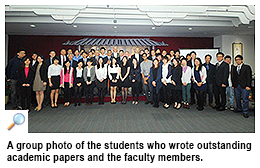 Fifty-three student papers have been added to an elite database at City University of Hong Kong (CityU) that allows a global audience to access the best papers written by our students.
The Outstanding Academic Papers by Students (OAPS), a joint project of the Run Run Shaw Library and CityU’s academic departments, celebrated the new additions at a ceremony at CityU on 26 April.
“The OAPS project symbolises what we are trying to accomplish for and with our students here at CityU,” said Professor Arthur Ellis, Provost at CityU, in his welcoming address at the ceremony.
OAPS has accumulated 294 papers affiliated with 17 academic departments over the past eight years, and this year saw a 66% increase in the number of papers included.

The papers can be accessed locally and remotely via the CityU Library Catalogue, and are searchable on major search engines and digital library alliances, such as Google Scholar, WorldCat, and PRDLA (Pacific Rim Digital Library Alliance).
The average usage rate in 2010–11 was 260 per paper, but the rate has increased to 560 and 880 respectively in 2011–12 and 2012–13. In addition, a citation search reveals that several OAPS papers have been cited by scholars and students worldwide, including in China, Ireland, Mexico, New Zealand and the US.
From Google Scholar, it was found that 26 papers had been cited, three of them twice, in journal articles, conference proceedings papers, theses, or book chapters around the world.
“The OAPS project represents Hong Kong’s critical thinking, its ability to nurture talent, its desire to place itself, to re-invent itself, to become more relevant within its own communities as well as in its region, and to be able to pursue new challenges,” said guest of honour Mr Mario Ignacio Artaza, Consul General of Chile of HKSAR & Macau SAR, in his congratulatory remarks at the ceremony. 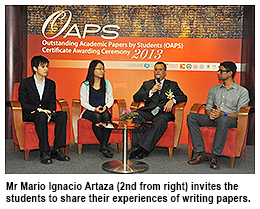 Professor Steve Ching Hsiang-hoo, University Librarian, thanked CityU’s academic departments and the Library for making this project such a success. “OAPS would not be possible without the concerted efforts of the OAPS team and the Library Institutional Repository team, including Digital Library and Cataloguing, and the dedication of the OAPS liaison officers, faculty members and the unfailing support of the academic departments.”
The OAPS project has developed partnerships with a rising number of premier universities worldwide, including in the US and in the Asia-Pacific Rim, such as mainland China, Japan, Korea, Singapore, Taiwan and Thailand, helping to promote cross-cultural understanding.
“Through this project, we hope to broaden the horizons of our students, nurture their multicultural sensitivity in order to prepare them for a highly globalised, hi-tech world, and to equip them to be competent scholars and professionals after graduation,” Professor Ching added.
​