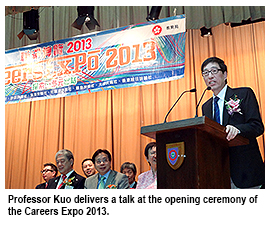 Professor Way Kuo, President of City University of Hong Kong (CityU), encouraged secondary school students to cultivate their own destinies in his talk at the opening ceremony of the Careers Expo 2013 on 27 April at Tsuen Wan Government Secondary School.
In his speech titled “Diverse pathways for students under the new senior secondary school curriculum”, Professor Kuo advised students to take advantage of the new academic system and look for different development pathways based on their own interests.
“In this ever-changing era, it has become extremely difficult to get a full picture of the trend and development of the whole world. One critical decision for your further studies or career development will affect your prospects for the next few years, and may leave a mark that follows you for your whole life. It could even affect the next generation,” Professor Kuo said.
He compared secondary school students to ocean-going explorers. In order to reach the desired harbour at the other end of the voyage, we need navigation instruments and equipment, and a wise and sensible course, he added.
Professor Kuo pointed out that all roads lead to Rome. “There are many different career paths for young people,” he said. You do not have to go to university to get the chance to directly enter various fields and sectors and engage in practical work to build up experience and qualifications, he added.
He added that government policy makers, industrialists and educators should make a concerted effort to deal with the deficiency of the Hong Kong economy, i.e. that it relies too heavily on simplex industries. More employment opportunities should be created for citizens with intermediate levels of professional and technical knowledge.
The Careers Expo 2013 was jointly organised by Rotary International District 3450 and the Education Bureau of the HKSAR Government for Secondary 5 and 6 students at public schools and partner schools in different districts of the New Territories. About 1,600 students took part in this year’s Expo.