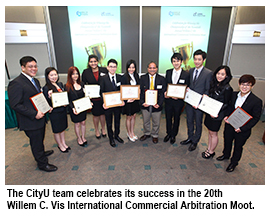 Students from the School of Law (SLW) at City University of Hong Kong (CityU) celebrated their success in a recent international mooting competition at a reception on 26 April.
The CityU team won the championship of the 20th Willem C. Vis International Commercial Arbitration Moot held in Vienna, Austria in late March. A total of 295 teams from 67 countries participated in the competition, which included top law schools such as Harvard University and Yale University. Last year, the CityU team also bagged the championship in the 9th Annual Willem C. Vis (East) International Commercial Arbitration Moot, a sister competition held in Hong Kong in 2012. CityU has now become the first and only institution in the world to win these honours in a row. 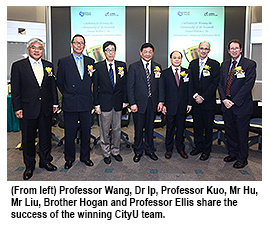 The officiating guests at the celebratory reception included Mr Herman Hu Shao-ming, Chairman of the CityU Council; Professor Way Kuo, University President; Dr Simon Ip Sik-on, Co-chairman, International Advisory Board of SLW; Mr Liu Chunhua, Deputy Director-General, Department of Law, Liaison Office of The Central People’s Government in the Hong Kong SAR; Brother Steve Hogan, Principal, La Salle College; Professor Arthur Ellis, Provost, CityU; and Professor Wang Guiguo, Dean of SLW.
The CityU team consisted of LLB students Cleo Chau Haye-teng, Timothy Ho Lok-tim, Kamaljeet Kaur, Sharina Mahtani and Ron Yung; JD student Liang Fang; and PCLL students Jacquelyn Ng Ga-hei and Eric Ng Kar-yan. Eric and Jacquelyn also won Honourable Mentions in the Best Oralist category. Dr Rajesh Sharma, Director of Mooting, coached and supported the team throughout the preparation stage to the actual competition.
This year’s problem for the moot centred around a dispute arising from a delivery of polo shirts from Equatoriana to Oceania (two imaginary states). Participants had to grapple with the issues in relation to procedural and substantive law, and also the amorphous idea of ethics in the written memoranda for claimant and respondent, as well as the oral arguments based upon them.
This is the first time any team from Hong Kong has prevailed in the Grand Finals in Vienna, a milestone in the history of legal education and scholarship at CityU. Members of the team said that the success in Vienna was a poignant demonstration of the power of unity and devotion to a shared cause and to each other.