​
The President of City University of Hong Kong reiterated the importance of content in communication during his plenary speech on 19 April at an academic conference titled: “The Future of English in Asia: Perspectives on Language and Literature”. 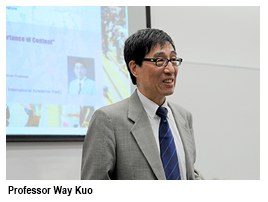 “English is the most commonly used language in the world today,” said Professor Way Kuo. “An estimated 331 million people around the world speak English as their native language, and it is the most effective tool for international communication, spoken in various exchanges in business, academia, politics and science.”
This was one of the reasons why academics from all over Asia and further afield had come to Hong Kong to explore the future of English from an Asian perspective, he said.
“But we should not lose sight of the essence of communication, i.e. content, which is even more important for effective communication,” he said in his adress, which was titled “Beyond English: the importance of content”.
He illustrated his point by citing well-known examples: Dr Genichi Taguchi , a well-known scholar in complete quality control; Professor Kai Lai Chung, who used to teach at Stanford in the 1960s and was emeritus Professor of Mathematics there; and Professor Tien Chang-lin, who served as the seventh chancellor of the University of California, Berkeley.
“These people shared one thing in common: strongly accented English, which was difficult for many people to understand,” Professor Kuo said. “But it didn’t stop them from making huge impacts in their respective fields. In any communication, it is the content rather than the medium that really counts, or as the old saying goes: ‘The fragrance of musk spreads naturally without the help of the wind’.”
Professor Kuo added that if we use only proficiency of English as the yardstick to judge levels of internationalisation, we risk forgetting that internationalisation also concerns what we can offer the world as a society. He pointed out that South Korea had changed beyond all recognition over the past 20 years and yet its success had not depended on the ability of its people to speak fluent English.
“The Koreans have shown the world that changing with the times and modifying one’s mindset are more crucial in this globalised world,” he said.
The three-day conference, which was organised by the Department of English at The Chinese University of Hong Kong, drew academics from India, Japan, mainland China, Singapore, Sri Lanka, Taiwan, The Philippines, and Vietnam, as well as from Australia and the UK.