In search of biologically relevant molecules that combat disease 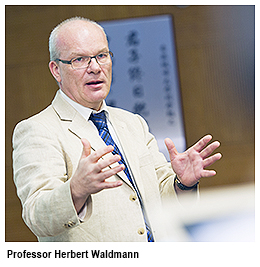 Finding an effective treatment for cancer is arguably one of the Holy Grails of science, one that is cherished by the team led by Professor Herbert Waldmann, Director of the Department of Chemical Biology and the Max-Planck-Institute of Molecular Biology, despite the enormous challenges that ensue.

Speaking at the latest City University Distinguished Lecture Series at City University of Hong Kong (CityU) on 25 March, Professor Waldman provided a succinct summary of the work he and his fellow researchers conduct in trying to discover and then synthesise bioactive substances that can help in the battle against some of the most prevalent diseases today.

During his talk, he outlined the challenges facing researchers hunting for molecules that might be suitable candidates for combating cancer, stressing that the search was rather like looking for a needle in a haystack because of the vast libraries of chemical compounds that need to be analysed. 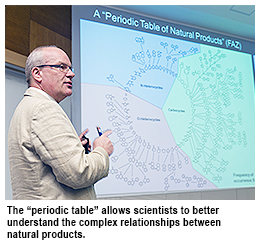 However, breakthroughs in computer technology have allowed the team to create fast and efficient programmes that greatly enhance and accelerate navigation through the seemingly endless array of molecules.
Professor Waldmann also introduced the basic principle of biology-oriented synthesis (BIOS) which is to look for naturally occurring substances that might benefit human cells, for example, just as the natural product morphine can reduce pain in patients.
“Organic chemistry is powerful enough to make natural products, and to make effective tools to investigate biology,” he said.
Another important part of the talk focused on the “Periodic Table” of natural products, the first structural classification of natural products, helping scientists to “navigate the chemical space of natural products”, according to the speaker. 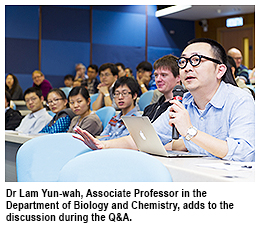