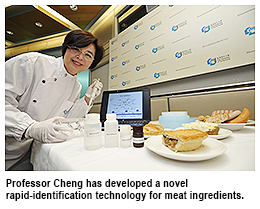 The tools, which can reduce the identification processing time by 80%, comes in the form of a specially made “testing paper” that uses molecular biotechnology. While it takes 48 hours for conventional DNA sequencing technology to verify food ingredients, Professor Cheng’s new technology needs only eight hours.
“We can verify the meat ingredients against what is claimed on food labels even for packaged sausages and meat balls made with mixed meats,” Professor Cheng said. “Our technology is applicable to meat processed by different methods, either raw or frozen meats.”
Not only can the new technology identify multiple species, such as meat from pigs, cows, sheep, horses, dogs, cats and mice, it can identify these seven meat species in a single experiment. Conventional methods for identification using DNA sequencing target just one species at a time and require extra experimental procedures for identifying multiple species.
The technology can be developed further to identify as many as 30 meat species at a time, according to Professor Cheng, including meats popular in Hong Kong. “In principle, this technology can identify any species as long as it has DNA. In the future, it will be possible to test meat from chicken, duck and goose as well as seafood like scallop, maw, abalone and shark’s fin,” Professor Cheng said. 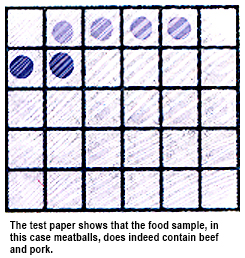 The first step in the verification process is to extract a small amount of DNA from the food sample, multiply it by molecular biotechnology and inject it on the white test paper, Professor Cheng explained. Tiny artificial structures called “probes” developed to identify each different meat species are placed on the surface of the test paper. When the probe detects the DNA of the target meat species, the test paper turns purple. Because the innovative technology does not require the usual complicated DNA sequencing or data analysis, it significantly reduces testing time compared to the DNA sequencing method.
Professor Cheng’s research team has verified the ingredients against the labels for packaged mixed pork and beef balls, minced pork burger, shepherd’s pie made with mutton, and pork sausage sold in markets. For the sake of comparison, the team also tested a package of “veggie meat balls” and confirmed no meat ingredients were present.
The new technology will have a positive impact on public health because of the potential application in the area of monitoring the ingredients in pre-packaged foods and animal feed, Professor Cheng said.
“Hong Kong imports a lot of food each year. This rapid identification technology can help manufacturers and retailers verify the source of the food. It can also provide better protection for general consumers and people who have food allergies or have special dietary needs for religious reasons,” she added.
“In fact, China and many countries in North America and Europe have stepped up control on animal feed by banning the addition of mammalian animal contents in order to prevent the transmission of mad cow disease and other infectious diseases. Our technology can help identify whether there are any unlawful ingredients in the animal feed,” she said.