City University of Hong Kong (CityU) and Chado Urasenke Tankokai Hong Kong Association (CUTHKA) held a ceremony on 11 March to mark the opening of a Japanese tea room on the CityU campus.
The name of the tea room, the first of its kind to be located at a university in Hong Kong, is “Yuko-an”. It will serve as a centre for promoting chado (the way of tea) and as a hub for promoting intercultural friendship and understanding between Hong Kong and Japan. 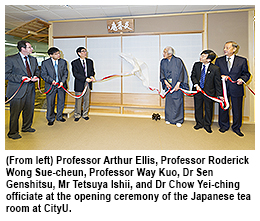 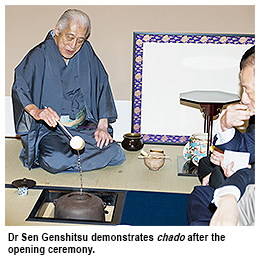 Dr Sen said at the ceremony, “I named the Urasenke tea room at CityU ‘Yuko-an’ in the hope that it will contribute to promoting friendship and communication between Japan and Hong Kong. Chado is one of the distinctive traditional cultures of Japan. It would be our great pleasure if tea and Yuko-an can enhance intercultural communication and understanding among the diverse people of Hong Kong.”
Professor Kuo said, “The Japanese tea room will play an important role in promoting our Gateway Education programme and East Asian cultural exchange activities. Today’s ceremony is an important landmark in our continuous efforts to increase diversity and internationalisation in tertiary education.”
The name Yuko-an is a combination of two Chinese words: friendship and Hong Kong, meaning the tea room is a place for enhancing harmony and friendship between the people of Hong Kong and Japan. It has been built according to the principles of traditional Japanese tea room design. Measuring eight tatami mats in area, it has a small garden (roji) with a stone lantern, paving stones imported from Kyoto and plants, creating a serene atmosphere that reflects Japanese people’s love of nature.
The Department of Chinese, Translation and Linguistics (CTL) of CityU will organise traditional tea gatherings and practices for educational and cultural purposes regularly at the tea room. A new Gateway Education course entitled “The Japanese Way of Tea: History, Arts, Architecture and Philosophy” is offered by CTL this semester, too.

In recognition of his significant contributions to cultural exchange and world peace through the way of tea, Dr Sen received the title of honorary professor from CityU at a ceremony held on the same day as the opening of the tea room. The title adds to his many prominent appointments such as Japanese United Nations Goodwill Ambassador and UNESCO Goodwill Ambassador. In 1997, he received the Order of Culture by the Emperor of Japan for his contributions to tea culture. 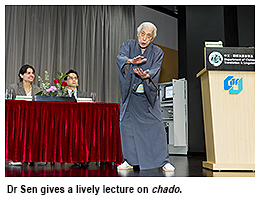 Following the award ceremony, Dr Sen presented a lecture titled “The Essence of the Way of Tea: The Way to Peace”. At the lecture, Dr Sen elaborated on the four principles underlying chado: harmony (wa), respect (kei), purity (sei) and tranquillity (jaku), and said that the essence of chado is peace.
CUTHKA was established in Hong Kong in 1997. It is one of the 84 official overseas associations of the Urasenke Tradition of Tea, which is devoted to promoting the way of tea to the public in Japan and overseas. The association has participated in cultural events to share the joy of tea drinking and worked closely with cultural and educational institutions to demonstrate tea serving.