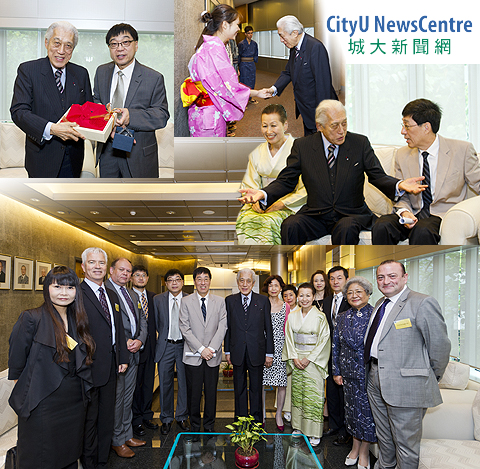 One of Japan’s leading figures in tea culture and a notable promoter of world peace visited City University of Hong Kong (CityU) on 23 June to promote Chado (The Way of Tea) and explore long-term collaborations with the University.

Dr Sen was Urasenke Grand Master for 38 years (1964–2002) and his family has a 500-year history in traditional tea, operating the largest tea school in Japan. He was awarded the Order of Culture by the Emperor of Japan in 1997 for his contributions to tea culture. He was also appointed as the Japan–UN Goodwill Ambassador by Japan’s Ministry of Foreign Affairs in 2005.

He promotes world peace under the theme “Peacefulness through a Bowl of Tea”. He has visited more than 62 countries and met more than 100 prominent world leaders such as United Nations Secretary-General Ban Ki-moon, Pope Benedict XVI, Queen Elizabeth II and Premier Wen Jiabao.