Innovation and creativity: key to success 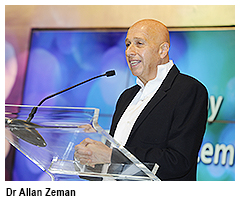 Dr Allan Zeman, Chairman of the Ocean Park Corporation and Chairman of Lan Kwai Fong Holdings Limited, and an honorary doctor of City University of Hong Kong (CityU), gave a lecture on the topic of discovery and innovation to a full house audience on campus on 4 March. The lecture was one of the highlights of the 2013 CityU Discovery Festival running from 3 to 7 March.
He was introduced by Professor Arthur Ellis, Provost of CityU, who praised him for his achievements. Professor Ellis noted that when Dr Zeman turned Lan Kwai Fong into one of the most lively entertainment districts in Asia, he put Hong Kong on the map not just as a business centre but as a place to have fun.
Following this tribute, Dr Zeman described how innovation gets him excited and stressed the importance of creativity, both of which are the foundation of his career.
As a successful entrepreneur, he said that “in my world, I have a can-do spirit. Everything is possible.” He then gave two examples of how this spirit made the seemingly impossible possible: Lan Kwai Fong and Ocean Park.
During his early years in Hong Kong, Dr Zeman said that Lan Kwai Fong was just a back street where flower sellers sold their wares. Most people then thought it was an ugly area, full of rubbish. But, as Dr Zeman explained, “I saw beauty there.” 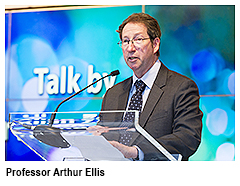 Recognising its potential, he went on to transform Lan Kwai Fong into the entertainment hot spot it is today. He is now being approached by municipal governments all across mainland China eager to re-create Lan Kwai Fong in their own cities.
Ocean Park was an even bigger challenge. When the then Chief Executive of Hong Kong, Mr Tung Chee-hwa, asked him to become the chairman of Ocean Park in 2004, he knew very little about theme parks.
At that time, Ocean Park was in a state of serious disrepair and, even more daunting, Disneyland —  the world’s best known theme park — was about to set up in Hong Kong.
Again, Dr Zeman saw the potential. “You must think world-class, aim for the best and be innovative.”
His first step was to examine the relative strengths and weaknesses of the two theme parks. Disneyland was all about fantasy, whereas Ocean Park was a local favourite for its wildlife attractions. As Dr Zeman put it, “Disneyland had a fake mouse, Ocean Park had a real one!” 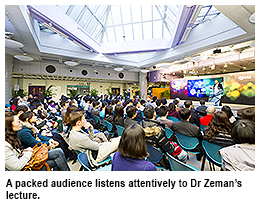 He then put together a top-class management team, produced a master redevelopment plan, and gave all of his staff a can of paint. Harnessing his creative powers, he saw that one of Ocean Park’s biggest draws was the jellyfish tank and built a huge new walk-through aquarium filled with exotic jellyfish species. On the opening day, despite his misgivings he put on a jellyfish costume to publicise the new attraction. Although he felt ridiculous, this act of creative inspiration garnered Ocean Park widespread media coverage not just in Hong Kong and Asia but worldwide.
Today, Ocean Park attracts seven million visitors annually and recently won the top spot in the Applause Awards, the Oscars of theme parks. Ocean Park is the first theme park in Asia ever to receive this honour.
One of the reasons for the success of Dr Zeman as an innovator is thinking not just as the boss of several thriving businesses but as a customer. This enables you to create products and services that people really want.
Equally important in the creative process is the ability not to be constrained by convention, budgets or other limitations but to really let go and discover what is possible. That is the secret to true discovery and innovation. “Let your mind dream,” Dr Zeman said, “Think the impossible, don’t be afraid.”