China’s Rise and the US Pivot — East Asia at the Epicenter? 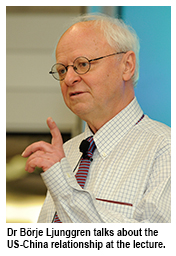 Dr Ljunggren opened his remarks by setting today’s geopolitical situation in the context of recent history. After the collapse of the Soviet Union, a new global order has emerged in a unipolar world described by Francis Fukuyama in his influential book, The End of History and the Last Man published in 1992. The book’s main thesis is that liberal democracy, particularly as practiced in the United States, is the final form of government for all nations.
Since then, however, we have witnessed a power shift with China’s rise on the world stage. According to Henry Kissinger’s 2011 book, On China, when a power shift occurs “things happen” and conflicts often break out.
Contrary to this viewpoint is the belief that China is not a revolutionary power as it is too deeply integrated into the global system and does not wish to disturb the existing world order. Dr Ljunggren believes the situation is more complex and the current order is not fixed but very fluid.
He went on to show the difference between post-war Asia up to the 1980s and Asia today. From 1945 to 1978, he said, Asia was riven by conflicts such as the Korean and Vietnam wars, the Cultural Revolution in China, the Cambodian genocide and many other disturbances. During this period, 80% of the world’s deaths were due to violence that occurred in Asia.
Today, Asia accounts for only 3–4% of the violent deaths across the globe. This era of peace and relative prosperity, Dr Ljunggren said, can be termed “Economic Asia”.
China is undoubtedly a global economic powerhouse, soon to become the world’s largest economy in terms of PPP (Purchasing Power Parity), as a result of Deng Xiaoping’s economic reforms and opening up in 1979. All of the major economies of Asia today can count China as their largest trading partner, particularly the members of ASEAN, the Association of Southeast Asian Nations. 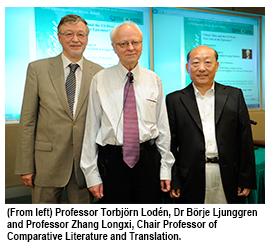 Despite the tight economic integration that has taken place across the region, Dr Ljunggren said, China does not always act in its best interests, as evidenced by the Diaoyudao Islands dispute that is pitting China against Japan. China also reacted angrily when the Philippines sought international arbitration against its claims to nearly the entire South China Sea, which it regards as a “core interest”.
Against this backdrop, ties have grown stronger between US and Asia, especially with China, in a relationship that has been dubbed “Chimerica”. When President Barack Obama succeeded President George Bush, his initial focus was to seek cooperation and not behave as a hegemon.
But with growing tensions between ASEAN members and China, US has begun reasserting its interests in the region. Relations between the US and Japan, the Philippines and Vietnam, for example, have grown much closer as these countries look to form security arrangements.
China’s strong reaction against these recently-formed alliances is not likely to change with the assumption of China’s new leader, Xi Jinping. Since taking power, he has reiterated that China will stand firm and there will be no change in the country’s foreign policy.
The heart of the US-China relationship, although fluid, is therefore one of strategic distrust and not likely to find balance in the near future. Dr Ljunggren feels this is not the right approach for China and that for peace to continue in the region it should behave as a responsible global stakeholder.
The guest speaker was introduced by Professor Torbjörn Lodén, Visiting Professor at CityU’s Department of Chinese, Translation and Linguistics. Professor Lodén pointed out that although Dr Ljunggren is officially retired he is still very active writing books, helping to organise forums and speaking at events
Dr Ljunggren is the head of the Asia Department of the Swedish Ministry for Foreign Affairs and Deputy Director General of the Swedish Agency for Development Cooperation (Sida). He is also responsible for the coordination of the Stockholm China Forum (GMF) within the Swedish Ministry for Foreign Affairs, chairperson of the SEB Asia Council and advisor to the Sweden-China Business Council. He has published a number of books and articles on Asia.