IT a double-edged sword in the arena of financial risks

Professor Leon Zhao Jianliang, Head and Chair Professor of the Department of Information Systems at City University of Hong Kong (CityU), gave a lively talk on the role of information technology (IT) in financial risks, reviewing the 2008 financial tsunami from the technology perspective and discussing how research could help manage risks in the future. 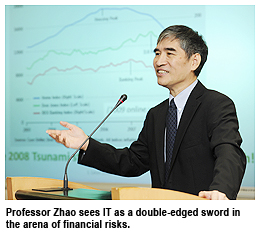 The lecture, delivered on 25 January, was the 13th in the President’s Lecture Series: Excellence in Academia. Titled “The 2008 Financial Tsunami and Future Prospects: Information Technology as Cause and Remedy of Financial Risks”, the talk guided the audience to view the global financial crisis in a new light.
Professor Zhao explained that information technology had changed “the game of financial risks”, which caught many people by surprise, including former US Federal Reserve chairman Alan Greenspan. In October 2008, Mr Greenspan admitted that he was wrong in presuming that markets could regulate themselves.
“Mr Greenspan was right for 40 years before he was wrong. It appears he relied too much on ideology, not enough on system analysis,” Professor Zhao said. The essence of “the Greenspan error” is that, before the financial crisis unfolded, he had underestimated the risks of recent technological advances and failed to realise the need to regulate the complex derivatives transactions that had been made possible by IT.
Professor Zhao used charts and examples to illustrate how technology helped to foster the subprime bubble that finally burst and triggered the market crash. He noted that bank operations have become increasingly computation intensive, and the notorious subprime mortgage bonds issued on the basis of complex systems of leverage owed their existence to the advance of computation technology.
However, rather than seeing IT solely as an evil that enables flawed and risky financial innovation, Professor Zhao sees it as a double-edged sword that can also be used to enhance the regulation of the financial markets. He thinks the possibility that the use of derivatives will continue to grow, coupled with calls for tighter regulation, will open up more research opportunities in information systems and risk management. 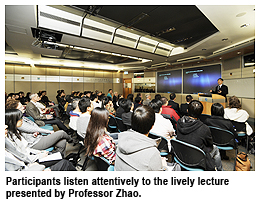 “Risk won't go away, but we need to manage it more systematically,” Professor Zhao said, adding that the remedy lies in “system analysis based on real data”. This involves systemic analysis of massive financial data, modelling markets as dynamic systems, financial simulation on a mass scale, and finding new financial information tools. All of this can help monitor bank systems, improve business intelligence and support better financial decisions, and requires new technology skills including cloud computing technology, which can process large amounts of real time data from various parts of the world.
Professor Zhao gave examples of his latest research to demonstrate what can be done. His team has analysed the systemic risks of bank networks based on real data from US. Stress testing simulation shows how different market scenarios can affect a bank’s liquidity risk. Such analysis could be used to support risk management decisions. Had Mr Greenspan seen such systemic analyses before the housing bubble burst, he might have been alerted to the perils and acted differently.
The Q&A session after the lecture saw enthusiastic participation from the audience and was filled with interesting discussions. In response to the point that complexity along with human factors like greed make the financial system hard to predict, Professor Zhao said that while prediction is difficult, it is needed to help people make decisions every day. Rather than succumbing to the pessimistic side of the picture, he chose to look forward and work for a better future. “As academia, we need to help people to operate intelligently and promptly in a more complex and volatile business environment,” Professor Zhao said.