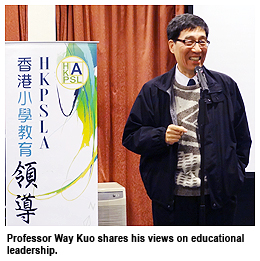 Professor Way Kuo, President of City University of Hong Kong (CityU), was invited to deliver a speech at the annual dinner of the Hong Kong Primary School Leaders Association on 4 January. During his speech, he shared his views on educational leadership with over 50 primary school leaders.
Professor Kuo said that leaders should possess a decent character, be able to lead by example, and predict and adapt to rapid changes in society. He quoted the famous British naturalist, Charles Robert Darwin, who said, “It is not the strongest of the species that survive, nor the most intelligent, but the one most responsive to change.” He pointed out that there were different standards and factors of success in different ages. Therefore leaders should not just stick rigidly to one principle but should be capable of change, for no dynasty or leadership could last forever.
Explaining why leaders should be flexible and open to change, he gave a few examples. A century ago in China, the president of Peking University, Hu Shih, could have just written poetry, seen operas and given lectures every day. His style of leadership, however, would definitely not be applicable to a university president today. 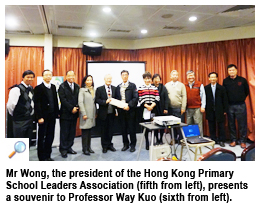 Professor Kuo continued with another example. Many people might have the perception that most of the management of the Fortune 500 companies are graduates of renowned universities in the United States. But, in fact, most of them graduated from state universities, according to a recent survey. Similarly, Nobel laureates did not necessarily come from Harvard University or Massachusetts Institute of Technology, but also from other US universities in the top 100.
He also made reference to the development of the automobile industry. At first, the industry was led by the United States and later by Japan for its high quality cars. In future, however, Korea might surpass Japan in view of its rapid development in recent years.