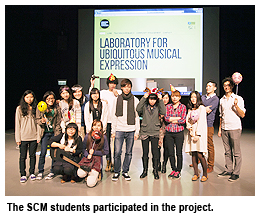 Around 100 kindergarten students have been immersing themselves in music through a series of interactive musical games designed by the School of Creative Media (SCM) at City University of Hong Kong (CityU).
About 30 SCM students from the Laboratory for Ubiquitous Musical Expression (LUME) had been developing six interactive musical interface prototypes for young children with little or no music training throughout the last semester. LUME is an idea incubator at CityU that focuses on the needs of individuals with few opportunities to make music. 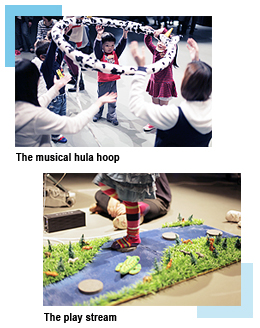 One of the innovative interfaces developed by the SCM students is a hula hoop connected to vibration sensors. The music changes according to the force that kids use to push the hoop. They can also step on points along a play stream to generate notes from different parts of a symphony.
The SCM students visited a Yuen Long kindergarten twice and invited the children to come to SCM for two trial runs of the interfaces. They also held an exhibition on 21 December 2012 at the Run Run Shaw Creative Media Centre to showcase their first phase prototypes for kids, parents and industry experts.
“This project helps young children with no music training integrate into the community and the music world,” said Dr Samson Young Kar-fai, SCM Assistant Professor who led the project. “The process of creating the interfaces allows SCM students to gain a first-hand research experience.”
The prototypes will be refined in the second semester, with the hope that some of them will be commercialised and made available on the open market in the future.