Connecting the dots and building the alumni network

City University of Hong Kong (CityU) organised a delegation of over 50 distinguished alumni for a cultural exchange tour to Taipei on 13 December, 2012. It was the first such activity in Taiwan, organised jointly by the Alumni Relations Office (ARO) and the Eminence Society, a distinguished alumni group, in the wake of a series similar activities held in mainland China, Australia and Singapore. It embodies the efforts of the ARO to connect the dots in building the alumni network. 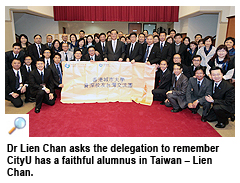 Mr Herman Hu Shao-ming, Council Chairman, and Professor Way Kuo, President of CityU, headed the delegation as co-honorary chairmen, and the members all boast of over ten years’ working experience, most of whom are senior executives or senior professionals. During the visit, members of the delegation visited in turn Dr Lien Chan, Honorary Chairman of Kuomintang, Chairman of the Peaceful Development on Both Sides of the Strait Fund Board and Honorary Doctor of CityU, and Dr Lung Ying-tai, Minister of Culture of Taiwan and a renowned writer. The delegation also held two forums where Dr Stan Shih, founder of the Acer Group and Chairman of iD SoftCapital Group, and Mr Robert Wu Qing-yu, founder and chairman of Eslite Group, were invited as key speakers. 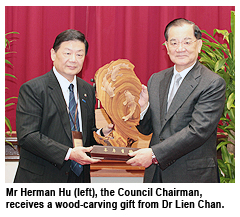 Dr Lien Chan was conferred an honorary doctorate in social sciences by CityU in 2011. He was very pleased to receive the CityU delegation and noted that cultural exchange of this scale was indeed rare. In the course of the visit, Dr. Lien shared his views with those present on the directions of Taiwan’s development and the mutual influences between the peaceful development on both sides of the Taiwan Strait on the one hand and the relationship among the Mainland, Taiwan, Hong Kong and Macau on the other. He believed that Hong Kong and Taiwan, as close neighbours, will certainly have future opportunities for cooperation in such matters as tours, sightseeing and field studies. He said with enthusiasm, “Come often to Taiwan. Remember you have a faithful alumnus here.”
Mr Herman Hu shared with Dr Lien Chan CityU’s development plan, including the School of Veterinary Medicine now under preparation, which is scheduled to enroll the first batch of students in 2014 and send off its first graduates in 2020. Mr Hu said that he had seen with his own eyes the continuous growth of CityU’s academic strength within a few years, with its ranking rising from being one among the top 200 universities in 2004 to 95 in 2012. With an eye to expand campus diversity and promote the integration of different cultural elements, CityU not only recruits excellent high-school graduates from Taiwan, but also begins to reach out to Southeast Asian countries. 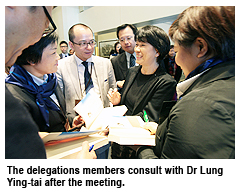 Dr Lung Ying-tai’s close relationship with CityU began in 2003. During her time in Hong Kong, she was a visiting professor at CityU. Upon receiving Professor Kuo’s request for a visit, she made special arrangement to have the chiefs of four departments of the Ministry of Culture brief CityU’s delegation on their work.
Dr Lung encouraged Hong Kong entrepreneurs and businessmen to get involved in the work of cultural developments and expressed her eagerness to see the completion of the Hong Kong Cultural District. She observed that Chinese culture is a most precious part of life in Taiwan, and hoped that the international community would gain a better understanding of the development of Taiwan through culture. She further expressed the wish to see the establishment of a literature institute through the promotion of language creative activities, where the communication among non-Han dialect groups can be strengthened.
Mr Herman Hu praised Taiwan as a place rich in culture, a shining example for Hong Kong to follow. He agreed with the idea that we should let people across the world get to know about Chinese culture and thought. 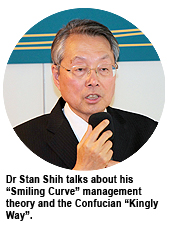 This cultural exchange tour lasted four days with many exciting activities. In addition to the visits, the delegation also toured two small towns on the outskirts of Taipei as well as Eslite Bookstore and Beitou Library. The two forums at which Dr Stan Shih, founder of the Acer Group, and Mr Robert Wu Qing-yu, founder and chairman of Eslite Group, spoke, however, left a particularly deep impression on the delegation.
The Acer Group is a leading company in the information technology business in Taiwan. In 1992 Dr Shih proposed the Smiling Curve, a new entrepreneurial management theory specially designed to “recreate Acer”. The curve, which looks like a smile, represents the upper, middle and lower sectors of the company’s business. The left segment of the curve stands for the part of the company that deals with technology and patent, the middle segment assembling and manufacturing, and the right segment branding and service. Different segments of the curve also stand for different profit margins, with the middle segment representing low profits, and the left and right high profits. For an enterprise which wishes to boost its profits, it pays to increase investment in the two ends of the curve.
From the Smiling Curve, Dr Shih proceeded to express his views on how to confront challenges, break bottlenecks, create values and raise the value of the assets. As he ranged from the Confucian “Kingly Way” to the attempts of today’s corporations to create value, he pointed out that in order to assume the position of a “King” today, one has to consider the interest of various stakeholders such as customers, employees, shareholders, suppliers, and even the non-sentient stakeholders such as society and the environment. 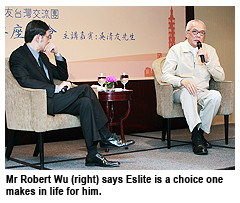 His idea coincides perfectly with that of Mr Robert Wu Qing-yu. Mr Wu believes that reading provides one with nourishments. Next to nature, books contain the greatest achievement of human intelligence. To him, to open a bookstore is not merely to run a business, but to provide a place where one can rest one’s mind. He says, “There are as many minds as there are men. When people of different walks of life come together in pursuit of arts, culture and creative activities, great energy is produced.”
Speaking from the depth of his mind, Mr Wu continued to say, “To me, Eslite is a choice one makes in life. The most valuable asset of a city is human being, and the most precious outcome of mental cultivation is a loving heart. In a good city, the existence of Eslite is a necessity.” This notion of his has touched the heart of many people. As a result, Eslite Bookstores not only begin to appear in other cities, but come to take up new forms and new modes of management. 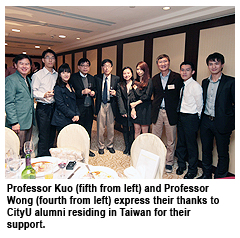 Also present at the forum held on the evening of the 15th were alumni of the CityU marathon delegation, who took part in the 2012 Fubon Taipei Marathon the next day, and CityU alumni residing in Taiwan.
CityU distinguished alumni who assisted in leading the delegation included Mr Andrew Fan Ka-fai, President of the Greater China Region at Nu Skin Enterprises Inc., Dr Peter Ho Ka-nam, Managing Director of Techworld Industries Limited, and Mr Simon Hui Hing-tak, Chief Executive Officer, E.P.S.A. Corporation Ltd. Ms Kathy Chan Yin-ling, Associate Vice-President (Alumni Relations) and Adviser to the Organisation Committee and Mr Andrew Fan were heads of the delegation. Professor Roderick Wong Sue-cheun, Vice-President (Development & External Relations), Professor Julia Tao Lai Po-wah, Chief-of-Staff and Dr John Chan Chun-tung, distinguished alumnus and a member of the Eminence Society, were honorary advisors. Among the members were Mr Chan Ka-kui, Council member, and distinguished alumni award recipients Dr Raymond Leung Siu-hong, Ms Dilys Chau Suet-fung and Mr David Hui Yip-wing.
Ever since its founding in 1984, CityU has turned out over 130,000 alumni, who engage themselves in different professions, trades, and businesses in Hong Kong, Mainland, and beyond. Some of them have become pillars of society. The alumni activities of this kind contribute a great deal to strengthening the close relationship between the University and its graduates and bring together their strengths in advancing the long-range development of the University.