Data keep growing fast, particularly those gathered from the Internet and various sensors, giving rise to “big data”, or collections of data sets too large and too complex to process by means of traditional database management systems. 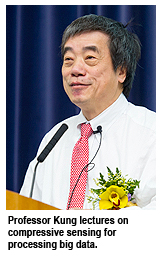 Yet, “data doesn’t mean anything until there’s a tool to use it,” said Professor H. T. Kung, William H. Gates Professor of Computer Science and Electrical Engineering at Harvard University, at the beginning of a lecture on 6 December at City University of Hong Kong (CityU).
In the lecture, titled “Big Data and Compressive Sensing” and delivered as the latest in the City University Distinguished Lecture Series, Professor Kung focused on “compressive sensing”, a new tool to address the issue of enormous data volumes, in addition to reviewing the background of big data and their applications and describing some general frameworks for analysing big data.
Professor Kung noted that data capture has been accelerating in recent years, as the Internet has been carrying communications such as blogs, emails, text messages, tweets, and eCommerce transactions, while various sensors or input tools such as meters, cameras, microphones, and mobile devices have been generating signals and images.
The resultant big data, the speaker pointed out, are characterised by “three V’s” – Volume (huge volumes), Variety (structured, unstructured, and semi-structured data), and Velocity (rapidly changing). Obviously, non-conventional data management methods are required to cope with such big data, and cloud computing, a new technology, has been one method instrumental in data analysis. 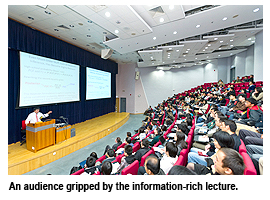 But can computing resources keep up with rapidly growing demands? Appetite for data analysis is unbounded, Professor Kung noted, citing as examples the analyses for predicting social agendas and consumer behaviour, and those for many other purposes. Decisions based on data analysis require sophisticated mathematical tools and careful reasoning, he added.
Ultimately we must compress data fast and in large quantities while retaining the essential information, the speaker emphasised, describing this as a fundamental requirement in information processing today. He went on to point out that, fortunately, we can generally tackle the task by dividing sample data into “routine” and “innovative” types, and then processing the former according to known, learned, or designed models, and addressing the latter with “compressive sensing”
In conclusion, Profess Kung said that, with such compressive sampling, we would be able to turn a big data problem into a smaller problem in a compressed-data domain, making it much easier to process, transport and store large data sets of huge volumes. He added that this means that even low-cost user devices such as mobile phones can directly participate in big data analysis. 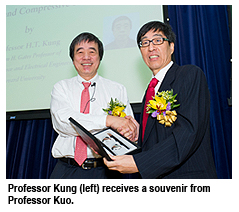 In his introduction to the speaker, Professor Way Kuo, President of CityU, praised Professor Kung for his remarkable achievements in computer science and expressed hopes that the lecture would greatly benefit the University’s staff and students.
Prior to joining Harvard in 1992, Professor Kung taught at Carnegie Mellon University for 19 years. To complement his academic activities, he has kept strong ties with industry and has served as a consultant for numerous corporations and government bodies. Professor Kung is member of the US National Academy of Engineering, member of the Academia Sinica of Taiwan, and awardee of Guggenheim Fellowship.
​​