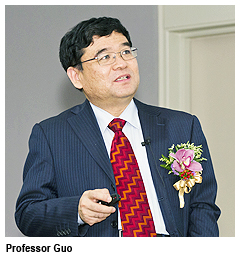 Flocks of starlings flying across the sky in formation or shoals of silver fish darting through deep underwater currents are among the visual wonders of the natural world, but their behaviour raises many questions. How do these animals decide which way to turn when they are flocking? How do they avoid each other, align and steer the same course over great distances?
Flocking is the exhibited behaviour of groups of birds, fish and insects, and it provided the main subject of a fascinating talk by Professor Guo Lei, Director of the National Center for Mathematics and Interdisciplinary Sciences at the Chinese Academy of Sciences (CAS), on 28 November. The talk, titled “Synchronization in Flocks with Large Population”, was the latest in the ongoing City University Distinguished Lecture series.
One of the fundamental keys to understanding the phenomenon of flocking is to appreciate the role of locally interacting agents, Professor Guo argued. In other words, how does the behaviour of local interacting agents contribute to the collective behaviour, and how do factors such as proximity and population size make an impact? Moreover, how many “leaders” are needed to initiate and sustain, and perhaps terminate, a flocking episode? 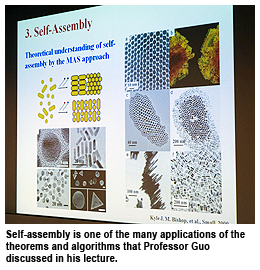 In the first part of the talk Professor Guo discussed recent developments in flocking analysis, reviewing theorems and models in the field. He then proposed the concept of “soft control” as a means of intervening in the flocking behaviour in order to gain greater insight.
“In many real-life applications, it is difficult or impossible to change the local rules of the agents, such as the moving strategies of animals,” he said. However, using complex algorithms Professor Guo argued that it was possible to gain insight into how flocks synchronise; i.e., literally, how birds of a feather flock together.
Work on flocking is not limited in application to the study of birds and fish. It is also relevant to human crowd behaviour, such as what factors impact the panic exhibited by large groups in certain situations, and also in the way people interact in games, the evolution of languages and also in the field of self-assembly, an area of interest to researchers in the field of nanotechnology engineering. Other areas of study, he said, lay in understanding the potential for artificial intelligence systems to interact with each other. 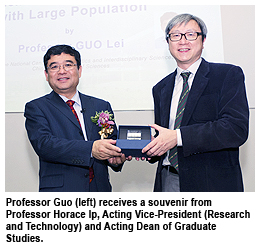 Questions in the follow-up discussion focused on whether the theorems that Professor Guo discussed could be applied to financial problems. Professor Guo said this would be unlikely since the financial crises of recent years were probably far too complex for the theorems so far devised.
In his introduction to Professor Guo’s lecture, Professor Arthur Ellis, Acting President, emphasised how the expansive nature of Professor Guo’s work aligned with the fresh interdisciplinary focus of CityU’s new 4-year Discovery-enriched Curriculum.
Professor Guo received his BS degree in mathematics from Shandong University in 1982, and PhD degree in control theory from CAS in 1987. He was a postdoctoral fellow at the Australian National University (1987–1989). Since 1992, he has been working at the Institute of Systems Science at CAS.
He was the President of the Academy of Mathematics and Systems Science, CAS (2003–2012), and is currently the Director of the National Center for Mathematics and Interdisciplinary Sciences, CAS.