​
An innovative 3D interactive installation about World War One called “ECloud” developed by researchers at the Applied Laboratory for Interactive Visualization and Embodiment (ALiVE) at City University of Hong Kong (CityU) has demonstrated the full potential for transdisciplinary heritage preservation using digital techniques on its Asian debut.
The exhibition is a highlight of NODEM 2012 Hong Kong, an international conference at the Run Run Shaw Creative Media Centre from 2–5 December that discusses the best practices in the use of digital media to make cultural heritage more accessible, engaging, and meaningful.

“ECloud” transforms linear browsing of web-based information such as letters and photos into an embodied experience. The project was led by Dr Sarah Kenderdine, Research Director of ALiVE in association with Professor Jeffrey Shaw, Director of ALiVE and Dean of School of Creative Media.
The installation is based on the crowd-sourced World War One archives of Europeana, an organisation co-funded by European Union that is building an online archive of digitalised cultural heritage items in Europe.
Curators at Europeana have been collecting stories and memorabilia connected to World War One since 2010 in the run up to the 100th anniversary of the outbreak of hostilities.
Seminal datasets from the Europeana archive become a dynamic amalgamation of personal stories, associated image clouds and soundscape inside a custom-designed, 9-metre-wide and 3-metre-high 3D projection environment. Using the semantic relationships in existing metadata, visitors can select related information that comes alive in front of them.
“ ‘ECloud’ shows what the future for interactive visitor experience could look like in GLAMs [galleries, libraries, archives and museums]. This is a fantastic way to move beyond the flat digital representation of objects and make it truly immersive and interactive,” said Mr Harry Verwayen, Business Development Director of Europeana.
Ms Neelie Kroes, Vice-President of the European Commission, and more than 10 ministers of culture from various EU countries attended the opening of “ECloud” when it made its debut in Europe.
The installation demonstrates the value of advanced technology such as laser-scanning, high-resolution photography, and large-scale immersive visualisation systems for the storage and display of cultural heritage.
“Today’s best exhibitions are redefining what intangible and tangible heritage means to a society where audiences and communities have become active participants, no longer passive observers, in knowledge transfer,” said Dr Kenderdine, one of the initiators and co-organisers of NODEM 2012 Hong Kong. 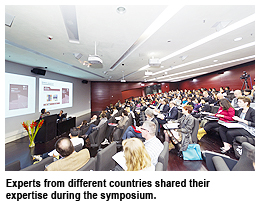 The symposium aims at creating an ongoing regional forum for the development and exchange of ideas and experiences under the theme “Future Culture: Intangible Heritage, Design, Cross Media”.
Pioneers from around the world in cross-disciplinary fields focus on a range of issues covering new forms of heritage interpretation and the future of new media at the forefront of museum design. The emphasis has been placed on cutting-edge research and practice from around the world, with a focus on tangible and intangible heritage in Asian contexts.
“Hong Kong is the perfect place to create a forum and network which will help participants stretch the boundaries of museology and curatorship,” Dr Kenderdine pointed out.
The symposium was hosted by CityU’s Advanced Institute for Cross-Disciplinary Studies in collaboration with the School of Creative Media and ALiVE, and the new Research Centre for Innovation in Galleries, Libraries, Archives and Museums (iGLAM).
It was supported by the College of Liberal Arts and Social Sciences and the Department of Chinese, Translation and Linguistics. It is part of the NODEM (Nordic Digital Excellence in Museums) conference series under the stewardship of the Interactive Institute of Sweden.