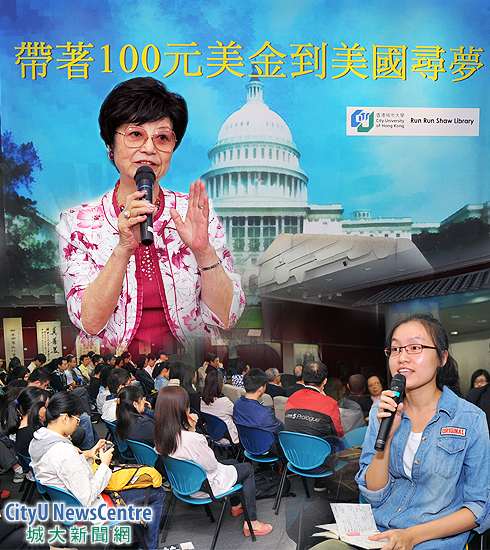 Former US Federal Libraries and Information Council member Ms Julia L Wu discussed achieving one’s dreams at a talk to students at the Run Run Shaw Library at City University of Hong Kong (CityU) on 13 November.
Ms Wu went to the US half a century ago on a student scholarship with $100 in her pocket. She used to work as a waitress in a Chinese restaurant near her university to help her pay her way through college. Her librarian career took off after she graduated and she was eventually appointed as a member of the Federal Libraries and Information Council by former US President Richard Nixon in 1973, the first person from China to have had such an honour. During her membership of the council, she served under six US presidents: Nixon, Ford, Carter, Reagan, George H W Bush and George W Bush.
Throughout her career as a senior librarian, Ms Wu emphasised the importance of reading, and she urged the audience to make full use of the library, read more, enhance their knowledge and try to understand the world around them better. “Even the First Ladies [the presidents’ wives] volunteered to promote reading at libraries to help improve literacy,” she said.
Ms Wu added that students should always bear in mind that their efforts to contribute back to society will be much more important to them as they grow up than any material rewards they receive.