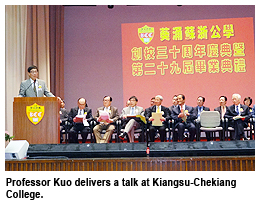 High school students were urged to cherish their youth and broaden their vision by the President of City University of Hong Kong (CityU) at the 30th Anniversary Celebration cum 29th Graduation Ceremony for Kiangsu-Chekiang College (Kwai Chung) on 9 November.
In his speech, titled “Embracing boundless hope”, Professor Way Kuo reminded students to heed the “inner treasure” of their youth and be ready for all the opportunities life had to offer.
He quoted Greek philosophy that said knowledge was like a circle. Inside lies the knowledge one has acquired, and outside lies the unknown world, which is beyond one’s scope of understanding. But as your knowledge accumulates, this circle expands. Once the circle is bigger, you become humble because you are more aware of the vastness of the unknown world, Professor Kuo explained. 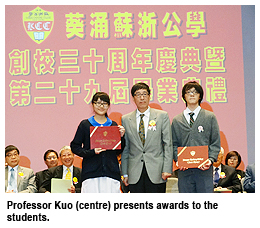 Professor Kuo elaborated the point by sharing an anecdote about Einstein, the father of modern physics. When asked how he was different from others, Einstein said most people would stop at finding a needle in a haystack whereas he would hope for a second needle and would search the entire haystack again.
“This anecdote tells us there is no time for self-congratulation. We need to be forever searching for new solutions, new challenges, new ideas and new knowledge,” Professor Kuo said.
He then quoted the American transcendentalist writer Henry David Thoreau, who said in his essay Life Without Principle that the aim of the labourer should not be just to get “a good job” but to perform well at a certain kind of work; not to work for low ends but for a scientific or moral purpose. “According to my experience, people who are successful love what they do, can’t wait to get their job done, and look forward to the challenges ahead,” Professor Kuo said.

Professor Kuo also advised the audience to have a broadened vision, instead of limiting oneself to Hong Kong, in order to become more internationalised. “More and more people in Hong Kong choose to travel, work, study or do business on the mainland. People around the world want a piece of the 1.3 billion market,” Professor Kuo said. “It doesn’t make sense for Hong Kong youths to ignore this opportunity voluntarily since you share the same roots, culture and language.”
Professor Roderick Wong Sue-cheun, Vice-President (Development and External Relations) of CityU, also attended the ceremony and presented awards to the students.