​
The need for accountability and changes to the academic culture in engineering education was the topic of a plenary talk by the President of City University of Hong Kong (CityU) at the 2012 International Forum on Engineering Education and University-Industry Cooperation on 26 October in Beijing. 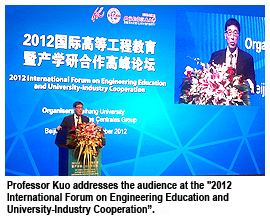 Professor Way Kuo was addressing an audience of more than 500 Beihang University faculty, staff, students and alumni as well as university presidents and senior administrators from over 45 universities. The forum, which was jointly organised and sponsored by Beihang University and the Écoles Centrales Group, was part of the 60th anniversary celebrations of Beihang University.
“Accountability is a broader concept than responsibility,” said Professor Kuo. “And it has been undervalued by our society. It should be applied to all levels of administrators, faculty, staff and students if we want to advance higher education in a modern university.”
He emphasised that society was changing fast. Universities, as well as our teaching, research, service and attitudes, need to respond accordingly, especially faculty who are the role models for students and the general public. 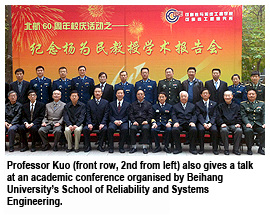 “The internationalisation we promote on campus is all about modernisation and adopting the best practices. In this respect, we still have room for improvement,” he continued.
“In engineering education and university-industry cooperation, as in everything else we do, we should aim at establishing a quality-centred education system. Sometimes it calls for a change of academic culture which is comparable to rolling rocks uphill. But such changes are possible if we map out a clear and measurable strategic direction and communicate it with people within the organisation,” he said.
Professor Kuo is one of the few honorary professors at Beihang University, with which CityU is developing collaborations in different areas. He also gave a short talk at an academic conference organised by Beihang University’s School of Reliability and Systems Engineering.​