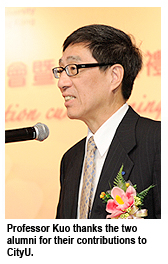 “I would like to thank Mr Ho and Mr Liu for their support for their alma mater,” said Professor Way Kuo, CityU President. “Both of them are highly successful people and great role models for CityU students.”
Professor Kuo added that CityU was ranked 95th in the world, signifying its excellence in teaching, research, campus facilities and the achievements of its alumni. “CityU transforms the great support from alumni into useful resources to nurture students with professional education. I would like to express our gratitude to the alumni again,” he said.
Mr Ho told the audience how his father influenced him. “After several failures, my father started his own business in the 60s. He gave us a high quality of life and a strong education. He was my role model and I grew up with the same attitudes to work and life as he had. I hope that CityU students can discover the never-give-up attitude of my father and contribute to Hong Kong and mainland China in the future,” he said.
Mr Liu said the naming had a special meaning to him. “CityU was the cradle that nurtured my academic studies. During my days at CityU, I had the chance to learn from renowned professors and make friends with outstanding students. Through interactions with them, I gained a lot, including solid friendships with classmates and a deep affection for my alma mater. I hope more alumni and members of the community will support CityU when they learn more about our outstanding achievements in the international education sector,” he said. 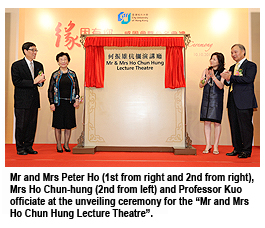 The bond between Mr Ho and CityU began before his studies at the University, when he sought professional help from the University for a company he had founded. He sponsored 25 of his staff to pursue graduate studies at CityU, and later he also enrolled in the University, too, graduating with a master’s degree and a doctoral degree in engineering management.
Mr Ho is an enthusiastic alumnus. He has served in various posts, as a Member of the University Court, an Honorary Advisor of the President’s Circle, and the Founding Chairman of the CityU Eminence Society. As an industrial partner of CityU’s cooperative programme, he has provided internship opportunities for many CityU students. In addition, he has made generous donations to his alma mater for setting up scholarships and supporting the development of the School of Graduate Studies.
As an Honorary Member of CityU’s Alumni Giving Club, Mr Ho has actively taken part in raising funds in recent years. To recognise his contributions to the University and society, CityU conferred the title of Honorary Fellow upon him in 2009. The University further expressed its appreciation by naming Lecture Theatre 12 as the “Mr and Mrs Ho Chun Hung Lecture Theatre” after Mr Ho’s parents. 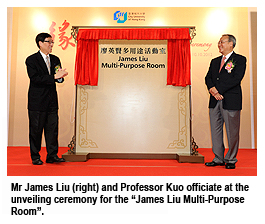 Mr Liu has kept close contact with the University since he graduated from CityU’s Executive Master of Business Administration programme in 2001. Currently serving as an Adjunct Professor at CityU’s College of Business, Mr Liu shares his years of business knowledge and valuable work experience with the students.
An equally enthusiastic alumnus, Mr Liu is a founding life member of the CityU Eminence Society. He is also an Honorary Member of CityU’s Alumni Giving Club, making donations over the years to support CityU. A staunch supporter of education, Mr Liu has sponsored and taken part in building schools in the mainland for children from low-income families.
In addition, Mr Liu recently made a generous donation again to CityU for setting up scholarships and other projects. To express our gratitude for his long-standing support, CityU named the Multi-Purpose Room after him, as the “James Liu Multi-Purpose Room”.
Located on the 4th floor of Academic 1, the Mr and Mrs Ho Chun Hung Lecture Theatre has a seating capacity of 120. Equipped with an advanced multi-media audio and visual system, the theatre can be used for teaching, seminars and international conferences. The James Liu Multi-Purpose Room is on the 4th floor of the Amenities Building, with a floor area of 560 square metres accommodating 300 people. It is equipped with an audio and visual system, and its spacious area can be partitioned into three venues for different student activities.