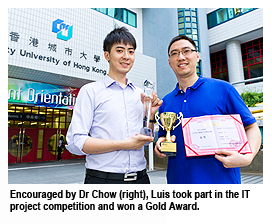 Luis Mok Ho-leung was the only Hong Kong student to receive one of four Gold Awards up for grabs at a contest that attracted participants from mainland China, Taiwan, Hong Kong and Macau. His app is called the “Mobile Live Streaming Application”.
A video broadcast on the internet normally requires a web camera, a computer and the necessary software. However, by creatively using advanced technology, Luis has developed an app for the iPhone and iPad that enables users to shoot interesting events and then broadcast them live for others to see on their smart phones.
The app integrates video broadcasting, geotagging and map display for streaming video by HTTP uploading, making live video broadcasts more accessible to a larger audience. What’s more, a unique function allows users to track the broadcaster if he or she changes locations. Luis believes that, to the best of his knowledge, his app is the first in the world to detect and track the location of a broadcaster.
The app is especially useful when broadcasting sports events. “For example, the broadcasters can shoot from various locations inside a stadium,” Luis said.
The app can also search for live video broadcasts. “If a user wants to watch football from Europe, he or she just needs to tap on the map and select a video of the game from one of the various live broadcasts,” he said.
The app even allows users to search for and watch a video at a later time, search for related videos, and make recommendations based on the users’ requirements and viewing history.
Luis beat the participants coming from over 270 universities of 10 mainland provinces, Taiwan, Hong Kong and Macau to enter the final. The judges looked for content, scientific value, creativity, difficulty of development, practicality as well as the participants’ presentation before making their decision.
“The app was my final-year project at CityU,” said Luis, thanking his supervisor Dr Ted Chow Chi-yin, Assistant Professor in the Department of Computer Science, for all his encouragement.
“When I first developed the app, I treated it just as a course assignment. However, the vigorous selection process was really exciting and I’m very happy that my app won a prize. I would like to thank Dr Chow again for his encouragement and assistance.”