Nuclear power and other energy resources were the subject of a talk by the President of City University of Hong Kong (CityU) at the Hong Kong Book Fair on 21 July. 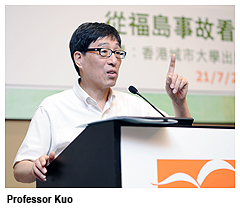 In his wide-ranging lecture before an audience of over 100, Professor Way Kuo examined the pros and cons of nuclear power in terms of safety and reliability, environmental protection and economic value. The title of his speech was “Reflections on Energy and Environmental Protection in the Wake of the Fukushima Nuclear Accident”.
He pointed out that energy was a pressing issue world-wide for several reasons, in particular because we need to generate sufficient electricity for the electronic devices and appliances used globally today.
However, he said he was neither promoting nuclear power nor an anti-nuclear message, nor focusing solely on environmental protection at the expense of other issues.
“We seek an optimal solution for both energy and environmental protection,” he said.
Nuclear energy, Professor Kuo said, was a particularly divisive issue. Germany announced that its nuclear power operations would be phased out by 2022, a decision that drew criticism from France, Sweden and other European countries, and there was opposition to nuclear energy in Japan following the nuclear accident last year.
However, Professor Kuo noted that a report released recently by the National Diet of Japan Fukushima Nuclear Accident Independent Investigation Commission said the 2011 nuclear accident had been a “man-made disaster” and that the government had restarted the Ohi Nuclear Power Plant on 1 July. 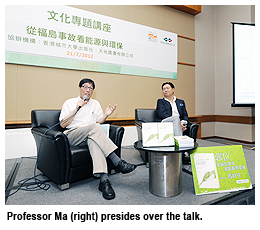 From an engineer’s point of view, he said, some matters are beyond our control, such as the extinction of dinosaurs, but it was vital that we employ all possible measures to achieve a desirable outcome in matters that we can confront.
Professor Kuo also said we should strike a balance between three factors, namely, the resources for energy; energy reliability and safety; and economic value. In such circumstances, a reliable energy requires a continuous and stable supply; furthermore, it must also improve people’s living standards and promote the development of society.
Professor Kuo then discussed “a spectrum of energies”: hydraulics, thermal (coal, oil and natural gas), nuclear, wind, solar, bio and others, and analysed the pollution and environmental problems involved in each option.
“About 70% of the energy used globally today comes from thermal power, around 20% of which is generated by nuclear power and the rest by hydraulic and wind,” Professor Kuo said. “From the point of view of emissions, coal generates the most serious pollution, while hydraulic power and nuclear power are the cleanest energies.” 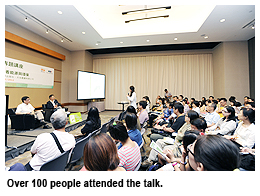 But, although nuclear power is the cleanest, it is not 100% safe, as we all know. The reliability of nuclear power is subject to three factors: machinery and equipment in a nuclear power plant; logistics and management; and staff. “All three factors must be taken into account and complement each other,” Professor Kuo said.
Risk is inherent in most human activity, Professor Kuo said, and there is a price to pay for everything. However, it was important to maintain rational discussions on the sustainable usage of energy and the sustainable development of the economy, and handle issues related to nuclear power and environmental protection carefully. Professor Frederick Ma Si-hang, former Secretary for Commerce and Economic Development in the Hong Kong government, presided over the talk and the Q&A session.
Professor Kuo was the first foreign academic invited by Japan to visit the Fukushima area after the accident. His book A Spectrum of Energies: Reflection of Energy and Environmental Protection in the Wake of the Fukushima Nuclear Accident is his ninth publication. It is a collection of articles that analyses issues related to energy, environmental protection and industrial safety. All royalties from the book will be donated to CityU’s scholarship scheme.