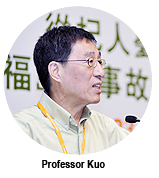 The risks and opportunities posed by nuclear energy were the main topics covered by the President of City University of Hong Kong (CityU) in a talk at the Hong Kong Book Fair on 23 July.

In his talk, Professor Kuo explained that he discussed safety issues concerning nuclear power with Japanese experts on nuclear power during a visit to Tohoku University a month after the Fukushima No. 1 nuclear power plant in Japan was severely damaged by a tsunami.

He gained first-hand knowledge from local scientists and residents about the earthquake, the subsequent tsunami and the future prospects of nuclear power during his visit to the university, which is located about 100 kilometres from the stricken plant, he said.

A popular Chinese fable The Man Who Worries Too Much provided a rich metaphor for the global response to events in Japan, Professor Kuo said. Just as the man in the fable worries that the sky will fall on his head, we cannot prevent every disaster from happening, and uncertainty will remain forever in the shadows of our thoughts.

“From the perspective of reliability, varying degrees of unreliability or uncertainty are contained in everything,” he explained. For instance, university students are not 100% guaranteed to graduate, he said. In fact, only about 50% graduate within six years in the US.

Professor Kuo held that, in developing nuclear power, we should strike a balance among three factors, namely, nuclear power reliability and safety, which includes physical and psychological safety; the resources for energy; and economy and environmental protection.

“We face many uncertain and unsafe factors in our lives, such as natural disasters, traffic accidents, environmental pollution, poisoned food, sickness, the rise and fall of the stock market, and the vicissitudes of the economy,” Professor Kuo said. “According to reliability analysis, a nuclear power plant is very safe and nuclear energy is cleaner than most other energy sources, but we cannot be assured of 100% safety. In many cases, the human factor is the problem.” 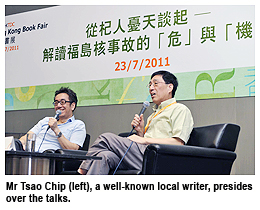 Local wit Mr Tsao Chip presided over the talk with his customary humour and wide-ranging knowledge, and before his talk, Professor Kuo and Professor Arthur Ellis, CityU Provost, browsed through the wares on display at the booth run by CityU Press, which has participated in the Hong Kong Book Fair for the last dozen years, promoting academic works and supplying quality books for students and the public.

This year, the CityU Press offered a brand new high-tech reading experience through its newly launched e-readers and four new books on Iran, Macao, Nepal and Thailand in the University’s Understanding Asia Series.

In addition, Andy Li Wing-ho, a PhD student from the School of Creative Media, enriched the exhibition with his interactive kinesthetic project, “Between the Lines”. Visitors could stand in front of a 103-inch plasma screen and make quotes taken from Chinese classics ring like the sound of a bell and turn golden simply by waving their arms.