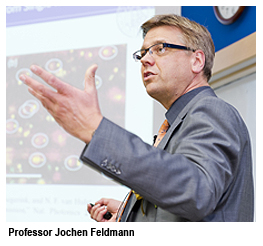 ​Noble metal nanostructures have an array of plasmonic applications, from optoelectronics and solar cell fabrication to biomedical technologies, according to Professor Jochen Feldmann, a renowned scholar in the field of optics with nanomaterials.
At the latest in the City University Distinguished Lecture Series held on 12 June, Professor Feldmann, Chair Professor of Photonics and Optoelectronics and Director of Nanosystems Initiative Munich at Ludwig-Maximilians-Universität in Germany, shared with the 100 plus academics and students the latest advancements in the top-down and bottom-up strategies for nanoscale fabrication, single molecule detection and enhanced interdisciplinarity.
Since Roman times, gold nanoparticles have been used to produce vivid ruby colours in glassware. But it was the discovery of the unique ways in which these nanoparticles interact with light that led to an explosion of research activity, a phenomenon that Professor Feldmann described as the “nano-gold rush”. 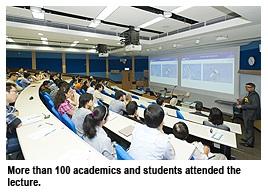 Noble metal nanostructures interact strongly with light, resulting in optical phenomena such as the possibility to localise enormous amounts of light close to their surface, an event known as “surface-enhanced electromagnetic field”.
Nanoparticles act as efficient light-harvesting antennae capable of transferring light energy, he said, adding that they possess multi-wavelength emission colours with high fluorescence quantum yields. The power conversion efficiency is enhanced via scattering, which makes performances such as the daily light and sound show in Hong Kong’s Victoria Harbour so vibrant and glamorous.
The nanoparticles are used to manufacture thin film photovaltaics, optical printing, multiple beams and parallel laser printing, and a full range of other printing tasks. They offer a great deal to biosensing medical diagnostics, such as testing drinking water for contamination, pregnancy tests and testing blood-sugar levels. There is also potential in their capability to detect external disturbances, promising to give birth to a nano ear.
“The next goal will be to detect the movements of bacteria by tracking the tiny oscillations of the flagella used by bacteria to move,” said Professor Feldmann. This process will help develop a sensitive and rapid protocol for detecting bacteria in blood products or other targets in biological samples. 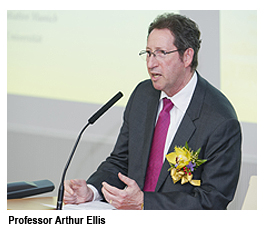 Acting President of CityU, Professor Arthur Ellis, applauded the daring and risk-taking spirit of Professor Feldmann. “At CityU, we are trying to capture that same kind of spirit in our new Discovery-enriched Curriculum, which will be launched this fall,” he said.
“We want every student to make some kind of original innovation or creative project during their studies and learn to find and seize upon opportunities since they will be confronted with all kinds of new situations in the world. Professor Feldmann’s talk will serve to inspire our staff and students,” he added.
Professor Feldmann is a leading researcher and practitioner in the field of optics with nanomaterials. Pioneering scientific contributions include first experimental demonstrations of Bloch oscillations in semiconductor superlattices, a bendable optically pumped polymer laser, recording light scattering spectra from individual gold nanoparticles, a single gold nanoparticle biosensor and laser printing and listening with single gold nanoparticles.