There was good news and bad news in a fascinating talk by a leading biophysicist from Princeton University on how bacteria develop resistance to drugs through evolutionary mutation. 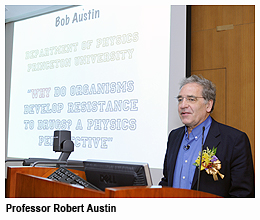 Worryingly for human societies, the world-wide battle against bacterial infections using our current battery of available antibiotics is under threat, Professor Robert Austin explained, speaking at a City University Distinguished Lecture on 21 March.

That’s because microorganisms intent of harming humans are finding increasingly sophisticated means of evolving, he explained, using cancer mortality data from the past 40 years to make his point.

“We haven’t made notable gains against cancer because cancer cells build up resistance to chemotherapy,” he said.

Other diseases such as tuberculosis are also becoming more deadly, and the spread of methicillin-resistant Staphylococcus aureus, better known as MRSA, is also a major concern.

What surprised Professor Austin and his team was not just that the bacteria develop resistance but the speed at which this evolution took place, even against Ciprofloxacin (Cipro), often referred to as the drug of last resort against major infections.

“It was shocking,” Professor Austin said. “We were witnessing rapid and innovative ways of bacteria bypassing the antibiotics. The system seems to know what it is doing.”

In his experiment, Professor Austin created a microfluidic chip comprising a series of inter-connected chambers, each one with the potential of growing bacteria. Into this ‘Death Galaxy’, the term he used to describe the environment, the team introduced nutrients and the antibiotic Cipro and waited to see if any resistance to the drug evolved.

The upshot of the results is the concern that even Cipro, a highly effective drug, might one day be useless against bacterial infections, a threat that has world-wide implications. 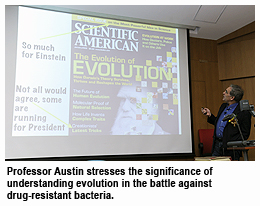 The good news is that despite the disturbing results, Professor Austin’s work is shedding new light on how bacteria evolve, information which could lead to the development of more effective drugs. New oncology centres had been set up in the US to research new ways of fighting cancer that go beyond chemotherapy, a form of treatment that Professor Austin believes is basically a failure.

“What we have learned is that cancer is driven by evolution, and we know that we cannot beat Darwin. So perhaps we should see cancer not as a disease but consider that it has some kind of evolutionary purpose,” he said.

In the meantime, humans can curb the spread of drug-resistant bacteria: don’t use antibiotics unless absolutely necessary, finish a prescribed course, beware of counterfeit medicines, and don’t take antibiotics prescribed for someone else.

What is incontrovertible, though, is how important it is today to appreciate the work of Darwin.

“Our tests suggest that evolution might actually be more powerful than we ever thought,” Professor Austin said.