More than 150 alumni, guests and CityU representatives enhanced friendships and expanded their networks at the “Beijing Alumni Reunion” in Beijing on 26 May.
The Beijing Alumni Reunion event was themed “Making a World of Difference” and organised by the Alumni Relations Office (ARO) of City University of Hong Kong (CityU), with the CityU Convocation as the partnering unit. The event, the third such gathering arranged by ARO, was not only well-received by the CityU alumni community in Beijing, but also other alumni from Hong Kong, Shenzhen, Shanghai, Tianjin, Ningbo, Shandong, Hebei, and Shaanxi. 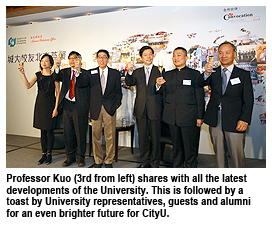 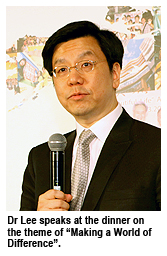 In his address at the dinner, Professor Kuo updated participants on the latest developments of the University and thanked them for their support. He also called on alumni to visit the University to see the new academic buildings on campus.
In his address, guest speaker Dr Lee talked about making choices in life under the topic “Making a World of Difference”, which is also the title of his autobiography. He identified five points that connect his working experience: “computer science”, “software”, “internet”, “back to China” and “Chinese youth”. His talk ended with interactive discussions with the audience, facilitated by Mr Andrew Fan, Distinguished Alumni and Alumni Ambassador for Greater China. 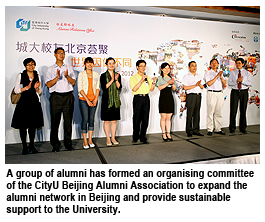 Alumni from Hong Kong and Beijing expressed their deep affection for their alma mater with different analogies. They said they hoped that alumni would be like dandelion seeds spreading and blooming in different fields around the world, and that alumni would continue to help the University make substantial advancements.
CityU has more than 2,100 alumni in different cities across the mainland, with about 370 in Beijing alone. An organising committee of the CityU Beijing Alumni Association has been formed by a group of enthusiastic alumni, aiming at strengthening the alumni network in the capital.