​
Students from the School of Creative Media (SCM) at City University of Hong Kong (CityU) have recently picked up major local awards for their excellence in creativity.

Ms Jessey Tsang Tsui-shan, a graduate of the Master of Fine Arts (MFA) in Media Design and Technology, received the Best New Director Award at the 31st Hong Kong Film Awards for her feature film The Big Blue Lake.
A music lover since childhood, she studied sound design for her post-secondary education. After graduation, she found a new interest in “telling stories”, and so she pursued further studies at CityU.
“During my two years at SCM, I acquired technical knowledge and, more importantly, different ways of looking at things,” Ms Tsang said. “I met a lot of good teachers whom I enjoyed talking to. They inspired me with ideas about creating art, making me see that creativity is not restricted to one’s individual work,” she said.
“My initial objective at SCM was to make new attempts to open up myself for breakthroughs. During those two years, I tried my hand at a lot of new things, including trying to use new media instead of conventional media to express my ideas. My final-year project was an online creative work to convey my feelings about my home village, Ho Chung,” she added.
Dr Linda Lai Chiu-han, Associate Professor in SCM who supervised Ms Tsang’s project, said she appreciated very much her bold efforts during her studies.
“The school encourages students to experiment and develop multi-levels of innovative thinking so that they may take on various tasks after graduation. Jessey has set a very good example to her junior students. She was bold to open up herself to new ways of thinking and she worked very hard to use new media for creative work. We are proud of the achievements she attained today,” she said. 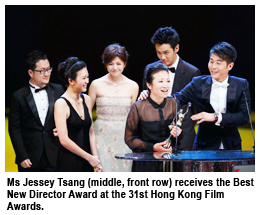 Ms Tsang’s award-winning film has received strong support from teachers and students at SCM. Ms Rita Hui Nga-shu, Instructor, was the producer of the film and six students took up roles such as assistant director and assistant art director. All the students who took part in the production said they enjoyed the experience very much, learning a great deal in the process.
Both Ms Tsang and Dr Lai said they would like to offer young people interested in film production and art creation the following three words of advice: concentration, patience and action.
“Creating art is not easy,” said Ms Tsang. “However, as long as you remain enthusiastic and patient, pay attention to things around you, stay curious about the world and persevere without giving up, you will be successful one day.” 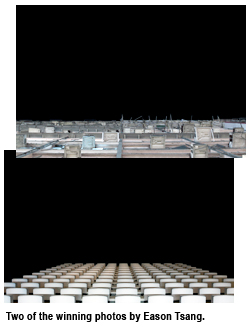 Meanwhile, Eason Tsang Ka-wai, a Year 2 student at SCM, won the Silver Award and the Hong Kong Best Award in a global design competition organised by the Hong Kong Designers Association (HKDA).
His winning photo series called “Landmark” contains upshot images of Hong Kong buildings. “I wanted to change the perspective of viewing Hong Kong. Most of the photos were taken at night to create a stage effect, with the focus on the buildings themselves,” he said.
The HKDA Global Design Awards is a competition-cum-exhibition covering disciplines for designers from around the world.
“I would like to thank SCM’s Mr Julian Lee Chi-chiu, Mr Phil Shek Ming-fai and Mr Warren Leung Chi-wo for their guidance and introducing me to inspiring photographers like Andreas Gursky and Gregory Crewdson,” he added.