The achievements of the 5th cohort of students to complete the two-week intensive Advanced Programme for Chinese Senior Judges at the School of Law (SLW) at City University of Hong Kong (CityU) were celebrated at a ceremony on 15 May.

The tailor-made SLW programme offers deep insight into the philosophy of common law and the essence of the Hong Kong legal system. During the programme, the participants attended intensive courses on Common Law, Hong Kong Law Drafting, the Hong Kong Judicial System, as well as Comparison of Mediation in Hong Kong and the mainland.

In addition, the judges visited local judiciary organisations and other legal institutions, such as different levels of the Hong Kong courts, the Hong Kong Legislative Council, the Law Society of Hong Kong, Hong Kong Exchange and Clearing Limited, the Independent Commission Against Corruption, Department of Justice, Legal Aid Department, and the Hong Kong Bar Association. 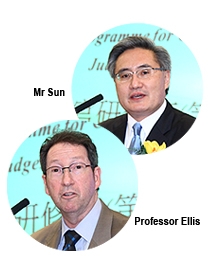 They met Hong Kong legal professionals such as The Hon Jasper Tsang Yok-sing, President of the Legislative Council, and The Hon Justice Patrick Chan, Permanent Judge of the Court of Final Appeal. Through in-depth discussions with legal professionals, the judges obtained a comprehensive picture of the Hong Kong court system, and the powers and functions of the Legislative Council.

“With the rapid development of the country and close relationships with Chinese and overseas markets, there is a need for mainland legal professionals to gain an insightful exchange with their Hong Kong counterparts in international law,” Mr Sun noted. “CityU is pleased to provide a platform for the exchange for both legal professionals and academia.”

Professor Ellis said: “The programme is a highly enriched learning experience for the judges, one that exposes the participants to international law and common law as well as a vast array of teaching and learning methods, world-class research and some of the most prominent legal minds in academia. The programme enhances exchanges between the two judicial systems and contributes to the general cultural development of China.” 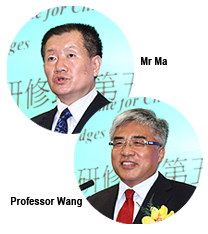 Mr Ramanathan spoke highly of the programme, describing it as “a classic example of bringing people from different jurisdictions” and saying that it “will serve to promote the common goal of law”. Mr Charles Chau noted that the programme will help to promote legal construction in China and fasten the pace of internationalisation.

Mr Ma Wenqing, Vice-Secretary of the Party Group and Vice-President of the Higher People’s Court of the Ningxia Autonomous Region, delivered the vote of thanks on behalf of the judges. He said that the judges received an overview of the rule of law in Hong Kong and brought with them the latest news about legal developments in the mainland during the two-week exchange. “We expect further exchange of this kind to promote mutual understanding,” he added.

At the end of ceremony, Professor Wang encouraged the judges to enhance the soft power of the country and the development of society.