A TV host and former member of the Legislative Council talked about his multi-faceted career at an annual dinner held by the Executive Master of Business Administration (EMBA) Association of City University of Hong Kong (CityU) on 28 April.

Before going into television, Dr Lee was an entrepreneur and served as a legislator. He was appointed to the Legislative Council in 1978 by the Governor of Hong Kong, and spent the next 20 years heavily involved in the political future and daily lives of Hong Kong’s citizens.

He has also been a member of the Executive Council and a deputy to the National People’s Congress of China. “I have spent more time worrying as a politician than being happy,” he admitted. Nonetheless, he was grateful to have served the people of Hong Kong, he said.

He does not regret losing his seat in the 1998 Legislative Council elections. The defeat gave him the opportunity to become a radio and TV programme host, he said. “Hosting a live programme requires a completely different set of skills, and I am thankful for the challenge. There is much more for me to learn and I am very much intrigued by the job,” he added. 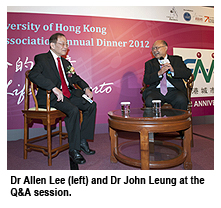 Dr Lee also shared his insights on the Chief Executive-elect with the over 100 EMBA alumni present at his talk. People change in order to achieve their objectives, he remarked. “To strive for stronger support for the Government and himself, I have seen changes in [Mr Leung Chun-ying],” he said, adding that he has high expectations for the new government.

Mr Chan Chung-kwong, Chairman of the EMBA Association, elaborated on the theme “Life’s Concerto”, chosen to commemorate the 15th anniversary of the EMBA programme. “Life is like a piece of music, composed of beats and pulses, highs and lows. Life is also like a concerto, sometimes flat and monotonous,” he explained. “The professors on the EMBA programme are like conductors who have helped compose our monotonous life into a concerto and decorated it with everlasting melodies.” 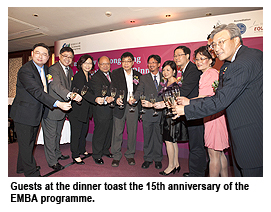 At the dinner, Dr John Leung Wai-keung, EMBA Programme Director, commended alumni and students for their enormous contributions, not only in monetary terms but also in the development of the University and the programme. In closing, he reiterated that “CityU EMBA begins with the supreme ‘You’”, with reference to students and alumni.

Two presentations were also made at the dinner. Ms Jan Wong Fung-ming was given the Most Valued Learning Partner Award for her continual support to CityU’s EMBA programme. The Progressive Achiever Award of Cohort 2009 went to Mr Horace Lai Po-yan for his outstanding performance.

More than 300 students, mainly senior executives from major corporations in Hong Kong, have graduated from CityU’s EMBA programme since it was launched in 1997.