About 140 students from City University of Hong Kong (CityU) discussed hot news topics at a meeting held by the Student Residence Office on 8 March. 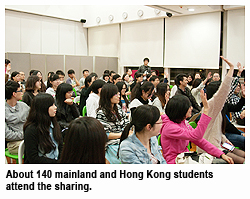 Under the spotlight were the rising number of pregnant women from the mainland booking local hospital beds; mainland students competing for resources in local universities; the large number of flats acquired by wealthy people from the mainland; and mainland visitors eating and drinking on the MTR.

The meeting was hosted by Liu Yu and Liu Xiang, two mainland students. They are the convener and writer, respectively, of “An Open Letter by Mainland Students Studying in Hong Kong”.

Dr Ma pointed out that the conflict between Hong Kong and the mainland could not be that serious as students representing both sides were willing to sit down and discuss the issues.

“If there really were a conflict, neither party would be willing to talk to the other,” he said.

However, acknowledging that tensions exist, he suggested that the Hong Kong government take timely and appropriate measures, and allocate resources in a reasonable manner. He added that local citizens should study the issues and offer constructive suggestions rather than simply criticise and offend.

Mr Chong said Hong Kong and mainland people supported the principles of freedom, democracy and caring for others, and should work to uphold these principles, and not let the market or extreme capitalism overshadow them.

“A large gap often exists between an ideal and reality, but we should not stop trying to reach for the best,” he said.

Dr Yao discussed the phenomena from the angle of migration. He pointed out that many Hong Kong people had migrated to Canada and the US in the past just as a lot of mainland people were moving to Hong Kong. He said it was natural for people to relocate.

“Assuming that only 0.1% of every ethnic group is uncivilised, China will have a larger proportion because of its huge population, which will give off a bad impression. However, should we reject an entire ethnic group just because of a small number of uncivilised people?” he asked.

Dr Yao encouraged all the students to try to see the issues from multiple perspectives.

The meeting was originally scheduled for one hour, but it was extended until midnight to incorporate the large number of questions raised. A German student even spoke in Putonghua to share his ideas. 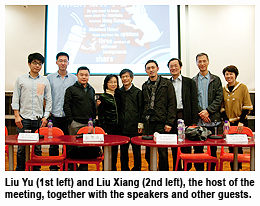 The aim of the meeting was to promote understanding and mutual respect between Hong Kong and mainland people.

“Many people only see a problem at a superficial level and they point out cultural and ideological differences between Hong Kong and the mainland when they see some of the mainlanders. They are not aware that a deficiency in the social and legal systems is the real cause,” Liu Xiang said.

As a mainland student studying in Hong Kong, I was inspired by the vision and perspectives of the three speakers at the meeting.

In the past three years, I have felt the enthusiasm and friendliness of the people of Hong Kong, and I know the prosperity of this city was built by their decades-long hard work. I believe the true enemy of Hong Kong is not the immigrants but the inner fear of some local citizens and the deficiencies in the social systems.

If the governments of Hong Kong and the mainland respond appropriately to the needs of the people, seek to eradicate prejudice and strengthen communication, more people will realise that the differences between the two parties are not so great.