More than 700 students, alumni and residence masters celebrated the 10th anniversary of the establishment of the Student Residence and the opening of Student Residence Phase IV at City University of Hong Kong (CityU) at the 10th Anniversary Joint-hall Dinner on 8 February. 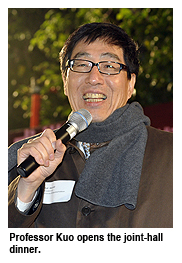 The joint-hall dinner was held in the outdoor area of the Student Residence for the first time, making the occasion even more memorable.

“During hall life, students can make many friends with people from all kinds of different backgrounds and learn about different cultures from around the world,” said Professor Way Kuo, University President, in his opening remarks. “The University is also promoting student exchange programmes with a pledge of $50 million in funding.”

CityU wants to double its international student intake and send more students to different countries on exchanges, he said, adding that several overseas universities had been added to the list of partner institutions in recent months. 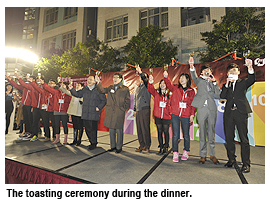 A simple but festive kick-off ceremony was officiated by Ms Rebecca Chan Po-yu, Director of the Student Residence Office, residence masters and members of the Residents’ Associations of each hostel. A video produced by students about the newly opened Student Residence Phase IV was presented, too. 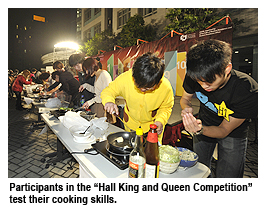 The exciting programmes in the joint-hall dinner demonstrate the core value of the Student Residence: “Celebrating and Supporting Diversity and Inclusion”. During the event, there were a singing performance by three students from different countries, the “Hall King and Queen Competition”, which included games requiring creativity and cooking skills, and brilliant yo-yo performance by a CityU alumnus.

The dinner was brought to a climax by a lucky draw and prize presentation to the winners of the “Hall King and Queen Competition”.