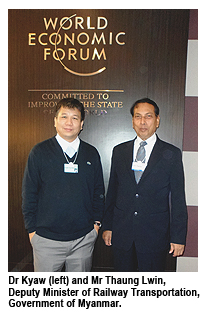 Dr Kyaw was invited to share his opinions about political liberalisation and the peace process in Myanmar (Burma) with world political, business and civil society leaders.

He attended a panel on leaders in the Association of Southeast Asian Nations and also met with financier and democracy philanthropist Mr George Soros, Australian Foreign Minister Mr Kevin Rudd, and the Trade Commissioner of the European Union to discuss the international community’s efforts to assist changes in Myanmar.

A leading expert on politics and society in Myanmar, Dr Kyaw is a director of Myanmar Egress, an NGO concerned with political change in the country. Before attending the Davos summit, Dr Kyaw organised a conference on 26-27 January titled "Myanmar after the 2010 elections" at CityU. The result of a fruitful collaboration between SEARC and the Friedrich Ebert Stiftung, a non-profit German Foundation noted for its sponsorship of innovative projects, the conference was the largest meeting of its kind on Myanmar since political liberalisation began there last year. 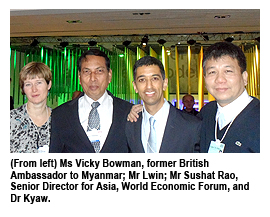