In the latest instalment of the President's Lecture Series: Excellence in Academia at City University of Hong Kong (CityU), one of Hong Kong’s most prolific and respected scientists explored the world of surface engineering and the modification of materials for an audience comprising fellow academics, students and members of the general public. 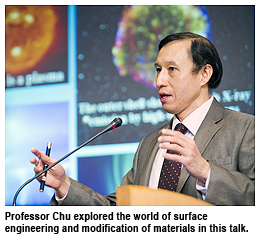 Professor Paul Chu Kim-ho, Chair Professor of Materials Engineering in the Department of Physics and Materials Science, spent the greater part of his presentation explaining how the groups that he leads at CityU endeavour to improve surface materials, impede the release of potentially harmful substances from materials, especially those that have been implanted in the human body as biomaterials, and decrease the degradation of materials in order to produce useful technologies.

In terms of biomaterials, he explained, innovative coatings and surfaces can regulate functions within various biological systems, managing cell-surface interactions through the control of the surface chemistry and topography.

“Our aim is to produce technologies and materials that are useful for people,” explained Professor Chu, who, among his many accolades, has been ranked by the Web of Science as the number one researcher in Hong Kong every year since 2006 and is ranked 100 out of 385,600 people worldwide in materials science by Essential Science Indicators. 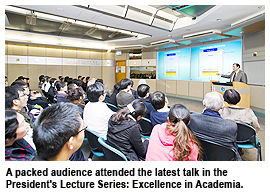 Some of his most notable recent success has been in the area of super-elastic stents made from a plasma-treated nickel-titanium (NiTi) alloy that can be inserted into the body for medical purposes, for example, treating chronic problems of the spine.

“Nickel leaching into the body can prove toxic but we can make the alloy safer for insertion into the body by modifying the surface structure to prevent harmful nickel ions from being released,” he said, adding that 24 patients with spinal problems have been treated successfully with NiTi rods so far.

This kind of pioneering problem-driven research, he explained, has been advanced through the hard work of his team, comprising CityU faculty, students, mainland collaborators and alumni, and well-orchestrated knowledge transfer via companies such as Plasma Technology Limited that he established in 1998. This company has won awards in the Hong Kong Awards for Industry in 2004 and 2011 respectively.

Professor Chu’s lecture also outlined his collaborations with other industry partners such as China Aerospace Science, the large high-tech state-owned enterprise under the direct administration of the central government, and in general areas of plasma science and engineering, ion implantation, surface modification and optoelectronic materials.

In addition to his exemplary achievements in materials science, including fellowships of renowned academic bodies such as IEEE, Professor Chu, a record-breaking swimmer and highly accomplished badminton player, emphasised the importance of the work-life balance in his professional life, indicating that the old adage “All work and no play…” underlies much of his success.