Professor Way Kuo, President of City University of Hong Kong (CityU), has been awarded an honorary doctorate by the Beijing Institute of Technology (BIT). He gave a talk titled “Reflections on Fukushima accident: nuclear energy and future energy” after the conferment ceremony on 11 January.

Presiding over the ceremony, Professor Hu Haiyan, President of BIT, read out the document from the Academic Degree Commission of the State Council granting the application to award Professor Kuo the doctorate. Attending the ceremony were key persons from BIT.

"The conferment of the honorary doctorate is a national honour granted by degree-conferring institutions with the approval of the Academic Degrees Commission of the State Council,” Professor Hu said.

Professor Kuo pursued his advanced studies, followed by a distinguished academic and administrative career, in the US for an extended period of 34 years, Professor Hu said. “He realised that the US achieved excellence in higher education because it attracted first-class talent from around the world, adopted a multifaceted and flexible teaching and research system, and provided a favorable environment where competition was encouraged and academic freedom guaranteed.”

Professor Hu went on to say how Professor Kuo, an internationally renowned expert on reliability research, introduced advanced systems after he took up his post as president of CityU, advocating best practice and setting a new trend for higher education in Hong Kong.

With his global vision as well as a scientist’s preference for precision and foresight, Professor Kuo energetically supported the pursuit of excellence as CityU’s guiding principle, Professor Hu added.

In his speech, Professor Kuo said he was honoured to be awarded the honorary degree, adding that he would continue to promote student-centred development in tertiary education, push for the enhancement of higher education in Hong Kong and strive for excellence with the aim of serving the Greater China area and the rest of the world. He would also augment cooperation and collaboration with universities on the mainland in order to contribute to social advancement and well-being, he said.

Professor Kuo, an expert on nuclear safety and reliability, took up the post of CityU president in 2008. In the aftermath of the Fukushima nuclear power plant accident in March of last year, he gave a series of public talks on nuclear energy and safety, promoting the need to pursue rational and informed debates. His analyses have attracted the attention of Chinese and overseas media, and he has penned a number of articles on the subject.

A month after the accident, Professor Kuo gave a speech in Sendai on nuclear safety, and in November 2011 he delivered a keynote speech at the opening ceremony of the annual European Safety and Reliability conference. 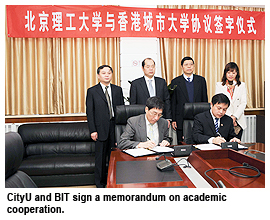 On the same day as the honorary doctorate ceremony, Professor Kuo and Professor Hu signed an MOU on academic exchange.

Focusing on technology and encouraging the coordinated development of science, engineering, management, and humanities, BIT is among the first batch of key universities allowed to set up a graduate school. It is listed in both the State 211 Project and the State 985 Project for the development of higher education.

Since its founding, more than 180,000 students have graduated from BIT. Alumni include 110 national, ministerial or provincial leaders, 35 academicians and a number of well-known experts and scholars. BIT is known for its academic excellence in the scientific and technological domains of space self-regulating optics, intelligent bionic robots, green energy, modern communications and industrial programme control.