The latest in a specially commissioned series of talks highlighting research excellence at City University of Hong Kong (CityU) had a two-fold purpose. 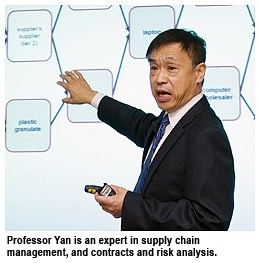 The gathered students, academics and guests were also offered a flavour of game theory in anticipation of next week’s lecture by Professor John F Nash, the legendary mathematician.

The essence of Professor Yan’s address, part of the President’s Lecture Series: Excellence in Academia, was the discussion of a framework of the consistency of supply chain coordination contracts.

The robustness of a contract between, say, a newspaper vendor and the supplier, can be characterised in terms of how consistent it is in the channel profit distribution, in the agents’ desires to fulfill the contract, and the impact of changing game structures, Professor Yan explained. 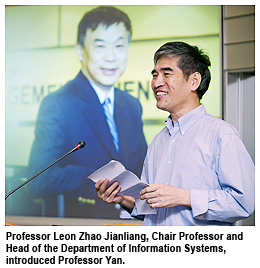 “We found that contracts can be designed, evaluated, and classified based on robust measures,” he said.

Using game theory, as delineated by Professor Nash, due to receive an Honorary Doctor of Science at CityU next week, the speaker concluded that a contract’s robustness could be strengthened by focusing on developing a number of sufficient conditions for obtaining “sequence and compliance consistencies” and by highlighting other decision variables such as price.

Professor Yan joined CityU recently after holding positions at the Chinese University of Hong Kong and the School of Management at the University of Texas at Dallas.