A closing ceremony for the Advanced Programme for Chinese Senior Judges was held on 25 October at City University of Hong Kong (CityU) to celebrate the success of the programme now in its fourth consecutive academic year. 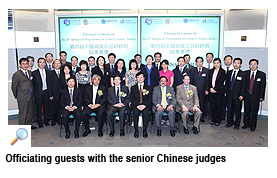 This tailor-made programme nourishes legal professionals familiar with both civil and common law.

The 31 judges from 24 provinces in the mainland who participated in the programme, which was held from 14 to 25 October, are typically involved in settling legal cases related to overseas, Hong Kong and Macau issues. 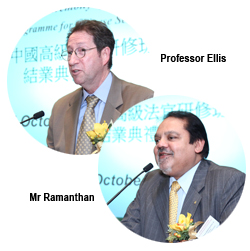 During the two-week programme, the participants attended intensive courses on common law and the core philosophy of international law. They visited local judiciary organisations and other legal and administrative institutions, such as different levels of the Hong Kong courts, the Hong Kong Bar Association, the Law Society of Hong Kong, the Legislative Council, the Commissioner’s Office of China’s Foreign Ministry in the Hong Kong SAR, the Hong Kong Securities and Futures Commission, the Legal Aid Department and the Independent Commission Against Corruption.

The participants also met with Hong Kong legal celebrities such as The Hon Chief Justice Geoffrey Ma, Chief Justice of the Court of Final Appeal, and The Hon Jasper Tsang Yok-sing, GBS, JP, the President of the Legislative Council. Through in-depth discussions with legal professionals, the judges obtained a comprehensive picture of the Hong Kong court system, and the powers and functions of the Legislative Council.

Professor Ellis spoke highly of the programme, saying it enhances the exchange between two judicial systems and contributes to the general culture of development in China. 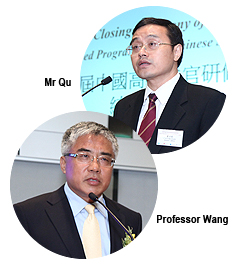 Mr Ramanthan thanked City’s law school for pioneering an understanding between professionals in different legal systems and building a closer relationship for the future through the programme.

Mr Qu Weidong, Vice-President of the Intermediate People’s Court of Guangzhou and Representative of the Chinese Senior Judges, said: “This well-organised programme is substantial in content and diverse in format. It has improved our understanding of Hong Kong’s legal system and structure. We are greatly encouraged by the spirit of law and its unwavering implementation in Hong Kong, and we are determined to contribute to the legal development in China.”

In his vote of thanks, Professor Wang thanked the Chinese senior judges for their enthusiasm, urging them to be modest and keep a high standard of legal practice and moral performance back at work. He promised that as a young and vibrant school, SLW will continue to innovate and make progress.