To further deepen the understanding of overseas legal systems among Chinese senior judges, the School of Law (SLW) at City University of Hong Kong (CityU) has initiated the first Doctor of Juridical Science (Chinese judges) Programme in China in collaboration with the National Judges College and the Supreme People’s Court of China from September 2011. At the same time, the 4th batch of judges in the Advanced Programme for Chinese Senior Judges arrived in Hong Kong to start the 2-week intensive legal study. A grand opening ceremony was held on 14 October at CityU to welcome the Chinese senior judges to both programmes.

Currently, CityU’s School of Law runs three Chinese judges programmes: the Doctor of Juridical Science (JSD) (Chinese Judges) Programme, the Master of Laws (LLM) Programme for Chinese Judges, and the Advanced Programme for Chinese Senior Judges. These tailor-made programmes are timely responses to the globalisation taking place in the legal profession, aiming to equip the judicial authorities in China with cutting-edge knowledge, sophisticated problem-solving skills and diverse perspectives; and further, to increase mutual understanding between judicial authorities and different legal systems. Three years after the LLM Programme for Chinese judges was established, the programmes have made steady progress and achieved another breakthrough by introducing the first JSD (Chinese judges) Programme in 2011.

The 3-year JSD (Chinese judges) Programme is designed for 20 senior Chinese judges. The taught component is conducted at CityU and the National Judges College in Beijing. Completion of the required subjects and a doctoral thesis form the basis of the award after a successful oral defence. Adopting a comparative approach, the programme aims to equip the judges with solid knowledge in common law and international law and enhance their problem-analysing ability after a strict internationally standardised education. This year, 20 Chinese senior judges have been admitted, most of whom hold concurrent positions as president and vice-president, etc. 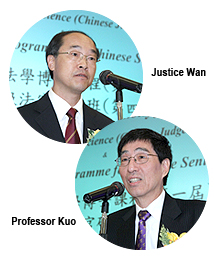 Justice Wan said at the opening ceremony: “Today’s event marks the formation of a strategic cooperative partnership between CityU’s School of Law and the National Judges College. The Chinese Judges Programmes at CityU is a timely response to the demand for high-quality judges in the fast-growing Chinese society, as statistics show that the number of foreign-related cases is increasing by 15 to 20 percent every year. The programmes also provide a platform for the two judicial systems to exchange and learn from each other. As we all know, CityU is a first-class university in Asia, even in the world, and I am sure that CityU will be the best brand for Chinese judges’ education.”

Professor Kuo said: “CityU always emphasises professional education, and the first priority is law and the second is business. The Chinese Judges Programmes are important because they bridge different legal systems and bring together scholars and experts from different jurisdictions to explore deeply law theory and education.”

“Extensive global exchanges require Chinese judges to master sufficient knowledge from different legal systems,” said Professor Wang. “To this end, CityU’s law school is developing these three programmes to improve the capability of frontline judges in China in dealing with foreign-related issues.” He said he hopes the Chinese judges will work hard to master essential knowledge during their studies at CityU.

Judge Wu Zaicun, student of 4th Advanced Programme for Chinese Senior Judges, Vice-President of the No. 1 Intermediate People’s Court of Beijing, describes the academic life in Hong Kong as a uniquely exclusive experience. On behalf of the Chinese judges, he said they will cherish the opportunity to deepen exchanges between the mainland and Hong Kong.