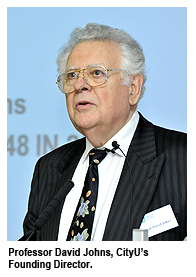 It was a flying start to his career. As a 17-year-old, Professor David Johns joined the Bristol Aeroplane Company as an apprentice, working on stress tests for wings and the nose undercarriage of freight and passenger planes.

Since those early days in southwest England, at end of the Second World War, Professor Johns has worked all over the world, forever searching for innovative solutions to complex engineering and management problems.

But the most stimulating assignment was not the role he played as Vice Chancellor of Bradford University or for the British military on ground-to-air missiles or for Concorde, the commercially unsuccessful but aesthetically stunning superonic airliner.

“Without a doubt the most challenging part of my career was helping to establish City Polytechnic, the forerunner to City University of Hong Kong,” said Professor Johns, CityU’s Founding Director, during his talk “Travels of an Engineer: Memories from 1948–2011” on 12 October. 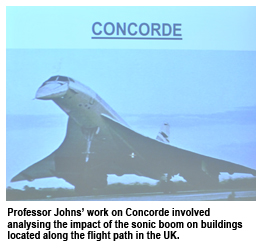 CityU’s sustained rise in world university rankings, he added, has been fueled by its excellence in research.

As an aerospace engineer, Professor Johns’ career trajectory has been as dramatic as some of the systems he has worked on. He has consulted on projects as diverse as bridges and super-tall buildings, stress loads on occupants in armoured military vehicles, collapsed cooling towers, the impact of an aircraft’s sonic boom on structures along the flight path, and the more fanciful designs of architects.

His academic career is equally illustrious. He was a lecturer at Cranfield College of Aeronautics (1958–1963); he held several senior positions at Loughborough University of Technology (1964–1983), including that of Senior Pro-Vice-Chancellor; he was Vice-Chancellor at the University of Bradford (1989–1998); and he was attached to CityU from 1983–1989, shortly before it achieved university status.

“My career as an engineer helped inform my life as an administrator,” he explained. “My engineering background has been a huge help in helping to run organisations. It is all about designing systems to make things work and motivate people.”

Professor Johns ended his talk with reference to role models, listing several eminent academics and engineers with whom he studied or worked. He advised the CityU students and staff at his talk to always bear in mind key people who influence and inspire them.